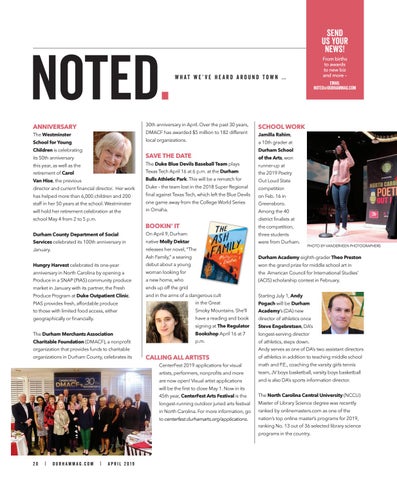 30th anniversary in April. Over the past 30 years,

DMACF has awarded $5 million to 182 different

Duke – the team lost in the 2018 Super Regional

staff in her 50 years at the school. Westminster

one game away from the College World Series

this year, as well as the

Bulls Athletic Park. This will be a rematch for

final against Texas Tech, which left the Blue Devils

will hold her retirement celebration at the

Ash Family,” a searing debut about a young

a new home, who

and in the arms of a dangerous cult

have a reading and book

organizations in Durham County, celebrates its

the American Council for International Studies’

organization that provides funds to charitable

won the grand prize for middle school art in

releases her novel, “The

ends up off the grid

market in January with its partner, the Fresh

of the Arts, won

anniversary in North Carolina by opening a

signing at The Regulator p.m.

director of athletics once

of athletics, steps down.

ranked by onlinemasters.com as one of the

artists, performers, nonprofits and more will be the first to close May 1. Now in its

ranking No. 13 out of 36 selected library science programs in the country.