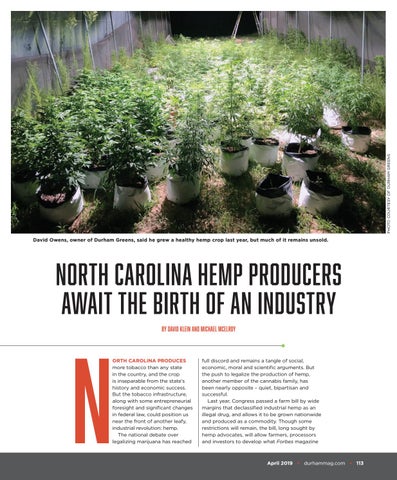 David Owens, owner of Durham Greens, said he grew a healthy hemp crop last year, but much of it remains unsold.

ORTH CAROLINA PRODUCES more tobacco than any state in the country, and the crop is inseparable from the state’s history and economic success. But the tobacco infrastructure, along with some entrepreneurial foresight and significant changes in federal law, could position us near the front of another leafy, industrial revolution: hemp. The national debate over legalizing marijuana has reached

full discord and remains a tangle of social, economic, moral and scientific arguments. But the push to legalize the production of hemp, another member of the cannabis family, has been nearly opposite – quiet, bipartisan and successful. Last year, Congress passed a farm bill by wide margins that declassified industrial hemp as an illegal drug, and allows it to be grown nationwide and produced as a commodity. Though some restrictions will remain, the bill, long sought by hemp advocates, will allow farmers, processors and investors to develop what Forbes magazine