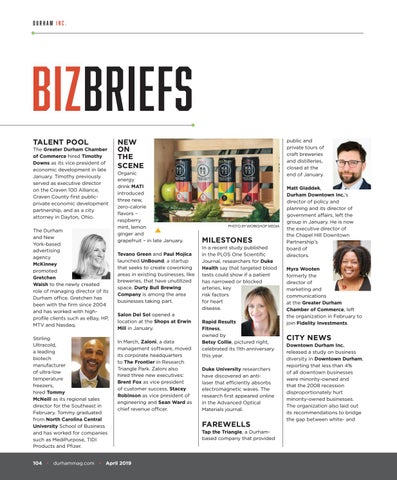 BIZBRIEFS The Greater Durham Chamber of Commerce hired Timothy Downs as its vice president of economic development in late January. Timothy previously served as executive director on the Craven 100 Alliance, Craven County first publicprivate economic development partnership, and as a city attorney in Dayton, Ohio. The Durham and New York-based advertising agency McKinney promoted Gretchen Walsh to the newly created role of managing director of its Durham office. Gretchen has been with the firm since 2004 and has worked with highprofile clients such as eBay, HP, MTV and Nasdaq. Stirling Ultracold, a leading biotech manufacturer of ultra-low temperature freezers, hired Tommy McNeill as its regional sales director for the Southeast in February. Tommy graduated from North Carolina Central University School of Business and has worked for companies such as MediPurpose, TIDI Products and Pfizer.

public and private tours of craft breweries and distilleries, closed at the end of January.

Tap the Triangle, a Durhambased company that provided

Matt Gladdek, Durham Downtown Inc.’s director of policy and planning and its director of government affairs, left the group in January. He is now the executive director of the Chapel Hill Downtown Partnership’s board of directors. Myra Wooten formerly the director of marketing and communications at the Greater Durham Chamber of Commerce, left the organization in February to join Fidelity Investments.