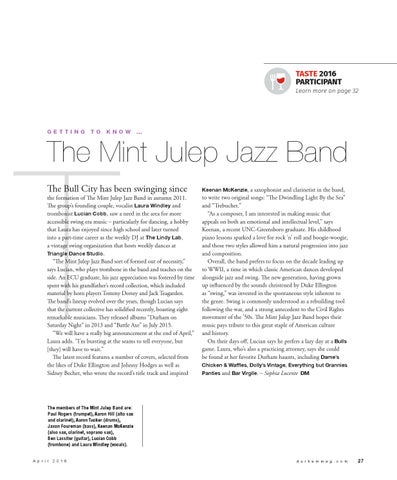 the formation of The Mint Julep Jazz Band in autumn 2011. The group’s founding couple, vocalist Laura Windley and trombonist Lucian Cobb, saw a need in the area for more accessible swing era music – particularly for dancing, a hobby that Laura has enjoyed since high school and later turned into a part-time career as the weekly DJ at The Lindy Lab, a vintage swing organization that hosts weekly dances at Triangle Dance Studio. “The Mint Julep Jazz Band sort of formed out of necessity,” says Lucian, who plays trombone in the band and teaches on the side. An ECU graduate, his jazz appreciation was fostered by time spent with his grandfather’s record collection, which included material by horn players Tommy Dorsey and Jack Teagarden. The band’s lineup evolved over the years, though Lucian says that the current collective has solidified recently, boasting eight remarkable musicians. They released albums “Durham on Saturday Night” in 2013 and “Battle Axe” in July 2015. “We will have a really big announcement at the end of April,” Laura adds. “I’m bursting at the seams to tell everyone, but [they] will have to wait.” The latest record features a number of covers, selected from the likes of Duke Ellington and Johnny Hodges as well as Sidney Bechet, who wrote the record’s title track and inspired

Keenan McKenzie, a saxophonist and clarinetist in the band,

to write two original songs: “The Dwindling Light By the Sea” and “Trebuchet.” “As a composer, I am interested in making music that appeals on both an emotional and intellectual level,” says Keenan, a recent UNC-Greensboro graduate. His childhood piano lessons sparked a love for rock ‘n’ roll and boogie-woogie, and those two styles allowed him a natural progression into jazz and composition. Overall, the band prefers to focus on the decade leading up to WWII, a time in which classic American dances developed alongside jazz and swing. The new generation, having grown up influenced by the sounds christened by Duke Ellington as “swing,” was invested in the spontaneous style inherent to the genre. Swing is commonly understood as a rebuilding tool following the war, and a strong antecedent to the Civil Rights movement of the ’50s. The Mint Julep Jazz Band hopes their music pays tribute to this great staple of American culture and history. On their days off, Lucian says he prefers a lazy day at a Bulls game. Laura, who’s also a practicing attorney, says she could be found at her favorite Durham haunts, including Dame’s Chicken &amp; Waffles, Dolly’s Vintage, Everything but Grannies Panties and Bar Virgile. – Sophia Lucente DM