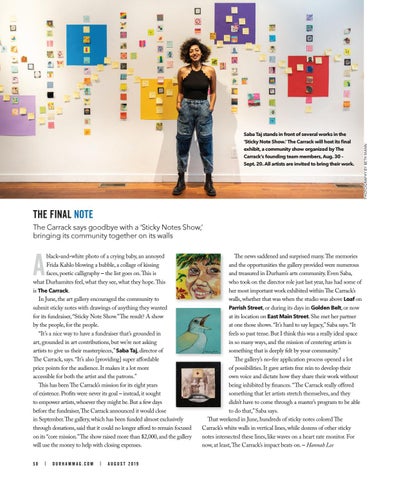 Saba Taj stands in front of several works in the ‘Sticky Note Show.’ The Carrack will host its final exhibit, a community show organized by The Carrack’s founding team members, Aug. 30 – Sept. 20. All artists are invited to bring their work.

THE FINAL NOTE The Carrack says goodbye with a ‘Sticky Notes Show,’ bringing its community together on its walls

black-and-white photo of a crying baby, an annoyed Frida Kahlo blowing a bubble, a collage of kissing faces, poetic calligraphy – the list goes on. This is what Durhamites feel, what they see, what they hope. This is The Carrack. In June, the art gallery encouraged the community to submit sticky notes with drawings of anything they wanted for its fundraiser, “Sticky Note Show.” The result? A show by the people, for the people. “It’s a nice way to have a fundraiser that’s grounded in art, grounded in art contributions, but we’re not asking artists to give us their masterpieces,” Saba Taj, director of The Carrack, says. “It’s also [providing] super affordable price points for the audience. It makes it a lot more accessible for both the artist and the patrons.” This has been The Carrack’s mission for its eight years of existence. Profits were never its goal – instead, it sought to empower artists, whoever they might be. But a few days before the fundraiser, The Carrack announced it would close in September. The gallery, which has been funded almost exclusively through donations, said that it could no longer afford to remain focused on its “core mission.” The show raised more than $2,000, and the gallery will use the money to help with closing expenses. 58

The news saddened and surprised many. The memories and the opportunities the gallery provided were numerous and treasured in Durham’s arts community. Even Saba, who took on the director role just last year, has had some of her most important work exhibited within The Carrack’s walls, whether that was when the studio was above Loaf on Parrish Street, or during its days in Golden Belt, or now at its location on East Main Street. She met her partner at one those shows. “It’s hard to say legacy,” Saba says. “It feels so past tense. But I think this was a really ideal space in so many ways, and the mission of centering artists is something that is deeply felt by your community.” The gallery’s no-fee application process opened a lot of possibilities. It gave artists free rein to develop their own voice and dictate how they share their work without being inhibited by finances. “The Carrack really offered something that let artists stretch themselves, and they didn’t have to come through a master’s program to be able to do that,” Saba says. That weekend in June, hundreds of sticky notes colored The Carrack’s white walls in vertical lines, while dozens of other sticky notes intersected these lines, like waves on a heart rate monitor. For now, at least, The Carrack’s impact beats on. – Hannah Lee