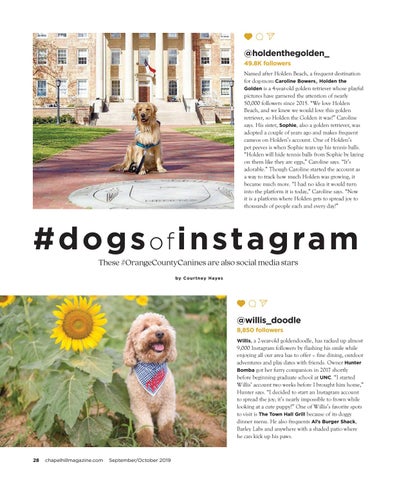 @holdenthegolden_ 49.8K followers Named after Holden Beach, a frequent destination for dog-mom Caroline Bowers, Holden the Golden is a 4-year-old golden retriever whose playful pictures have garnered the attention of nearly 50,000 followers since 2015. “We love Holden Beach, and we knew we would love this golden retriever, so Holden the Golden it was!” Caroline says. His sister, Sophie, also a golden retriever, was adopted a couple of years ago and makes frequent cameos on Holden’s account. One of Holden’s pet peeves is when Sophie tears up his tennis balls. “Holden will hide tennis balls from Sophie by laying on them like they are eggs,” Caroline says. “It’s adorable.” Though Caroline started the account as a way to track how much Holden was growing, it became much more. “I had no idea it would turn into the platform it is today,” Caroline says. “Now it is a platform where Holden gets to spread joy to thousands of people each and every day!”

@willis_doodle 8,850 followers Willis, a 2-year-old goldendoodle, has racked up almost

9,000 Instagram followers by flashing his smile while enjoying all our area has to offer – fine dining, outdoor adventures and play dates with friends. Owner Hunter Bomba got her furry companion in 2017 shortly before beginning graduate school at UNC. “I started Willis’ account two weeks before I brought him home,” Hunter says. “I decided to start an Instagram account to spread the joy; it’s nearly impossible to frown while looking at a cute puppy!” One of Willis’s favorite spots to visit is The Town Hall Grill because of its doggy dinner menu. He also frequents Al’s Burger Shack, Barley Labs and anywhere with a shaded patio where he can kick up his paws.