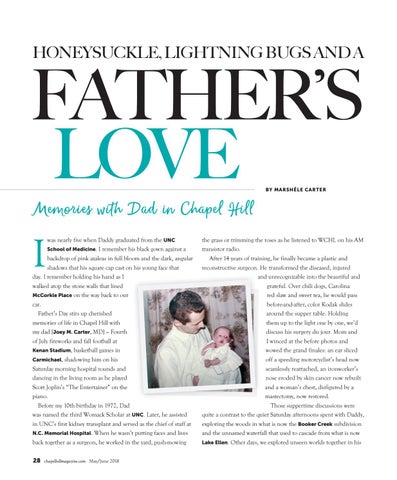 Memories with Dad in Chapel Hill

was nearly five when Daddy graduated from the UNC School of Medicine. I remember his black gown against a backdrop of pink azaleas in full bloom and the dark, angular shadows that his square cap cast on his young face that day. I remember holding his hand as I walked atop the stone walls that lined McCorkle Place on the way back to our car. Father’s Day stirs up cherished memories of life in Chapel Hill with my dad [Joey M. Carter, MD] – Fourth of July fireworks and fall football at Kenan Stadium, basketball games in Carmichael, shadowing him on his Saturday morning hospital rounds and dancing in the living room as he played Scott Joplin’s “The Entertainer” on the piano. Before my 10th birthday in 1972, Dad was named the third Womack Scholar at UNC. Later, he assisted in UNC’s first kidney transplant and served as the chief of staff at N.C. Memorial Hospital. When he wasn’t putting faces and lives back together as a surgeon, he worked in the yard, push-mowing 28

the grass or trimming the roses as he listened to WCHL on his AM transistor radio. After 14 years of training, he finally became a plastic and reconstructive surgeon. He transformed the diseased, injured and unrecognizable into the beautiful and grateful. Over chili dogs, Carolina red slaw and sweet tea, he would pass before-and-after, color Kodak slides around the supper table. Holding them up to the light one by one, we’d discuss his surgery du jour. Mom and I winced at the before photos and wowed the grand finales: an ear sliced off a speeding motorcyclist’s head now seamlessly reattached, an ironworker’s nose eroded by skin cancer now rebuilt and a woman’s chest, disfigured by a mastectomy, now restored. Those suppertime discussions were quite a contrast to the quiet Saturday afternoons spent with Daddy, exploring the woods in what is now the Booker Creek subdivision and the unnamed waterfall that used to cascade from what is now Lake Ellen. Other days, we explored unseen worlds together in his