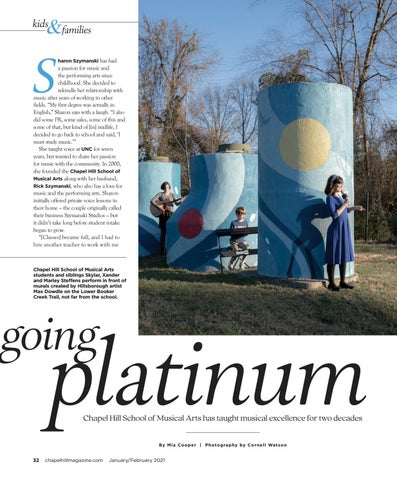 haron Szymanski has had

a passion for music and the performing arts since childhood. She decided to rekindle her relationship with music after years of working in other fields. “My first degree was actually in English,” Sharon says with a laugh. “I also did some PR, some sales, some of this and some of that, but kind of [in] midlife, I decided to go back to school and said, ‘I must study music.’” She taught voice at UNC for seven years, but wanted to share her passion for music with the community. In 2000, she founded the Chapel Hill School of Musical Arts along with her husband, Rick Szymanski, who also has a love for music and the performing arts. Sharon initially offered private voice lessons in their home – the couple originally called their business Szymanski Studios – but it didn’t take long before student intake began to grow. “[Classes] became full, and I had to hire another teacher to work with me

Chapel Hill School of Musical Arts students and siblings Skylar, Xander and Marley Steffens perform in front of murals created by Hillsborough artist Max Dowdle on the Lower Booker Creek Trail, not far from the school.