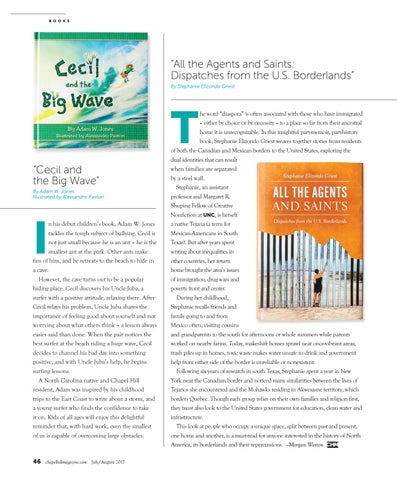 “All the Agents and Saints: Dispatches from the U.S. Borderlands” By Stephanie Elizondo Griest

“Cecil and the Big Wave” By Adam W. Jones Illustrated by Alessandro Pastori

n his debut children’s book, Adam W. Jones tackles the tough subject of bullying. Cecil is not just small because he is an ant – he is the smallest ant at the park. Other ants make fun of him, and he retreats to the beach to hide in a cave. However, the cave turns out to be a popular hiding place. Cecil discovers his Uncle Juba, a surfer with a positive attitude, relaxing there. After Cecil relays his problem, Uncle Juba shares the importance of feeling good about yourself and not worrying about what others think – a lesson always easier said than done. When the pair notices the best surfer at the beach riding a huge wave, Cecil decides to channel his bad day into something positive, and with Uncle Juba’s help, he begins surfing lessons. A North Carolina native and Chapel Hill resident, Adam was inspired by his childhood trips to the East Coast to write about a storm, and a young surfer who finds the confidence to take it on. Kids of all ages will enjoy this delightful reminder that, with hard work, even the smallest of us is capable of overcoming large obstacles.

he word “diaspora” is often associated with those who have immigrated – either by choice or by necessity – to a place so far from their ancestral home it is unrecognizable. In this insightful part-memoir, part-history book, Stephanie Elizondo Griest weaves together stories from residents of both the Canadian and Mexican borders to the United States, exploring the dual identities that can result when families are separated by a steel wall. Stephanie, an assistant professor and Margaret R. Shuping Fellow of Creative Nonfiction at UNC, is herself a native Tejana (a term for Mexican-Americans in South Texas). But after years spent writing about inequalities in other countries, her return home brought the area’s issues of immigration, drug wars and poverty front and center. During her childhood, Stephanie recalls friends and family going to and from Mexico often, visiting cousins and grandparents to the south for afternoons or whole summers while parents worked on nearby farms. Today, makeshift homes sprawl near once-vibrant areas; trash piles up in homes, toxic waste makes water unsafe to drink and government help from either side of the border is unreliable or nonexistent. Following six years of research in south Texas, Stephanie spent a year in New York near the Canadian border and noticed many similarities between the lives of Tejanos she encountered and the Mohawks residing in Akwesasne territory, which borders Quebec. Though each group relies on their own families and religion first, they must also look to the United States government for education, clean water and infrastructure. This look at people who occupy a unique space, split between past and present, one home and another, is a must-read for anyone interested in the history of North America, its borderlands and their repercussions. –Morgan Weston CHM