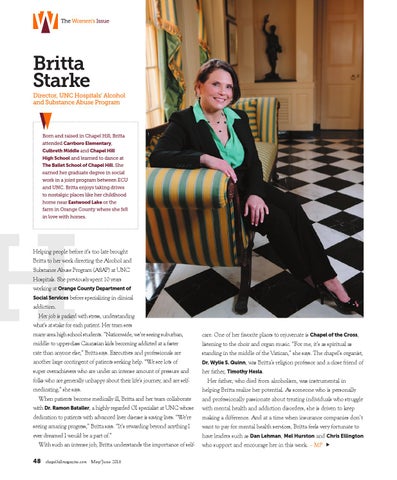 Born and raised in Chapel Hill, Britta attended Carrboro Elementary, Culbreth Middle and Chapel Hill High School and learned to dance at The Ballet School of Chapel Hill. She earned her graduate degree in social work in a joint program between ECU and UNC. Britta enjoys taking drives to nostalgic places like her childhood home near Eastwood Lake or the farm in Orange County where she fell in love with horses.

Helping people before it’s too late brought Britta to her work directing the Alcohol and Substance Abuse Program (ASAP) at UNC Hospitals. She previously spent 10 years working at Orange County Department of Social Services before specializing in clinical addiction. Her job is packed with stress, understanding what’s at stake for each patient. Her team sees many area high school students. “Nationwide, we’re seeing suburban, middle- to upper-class Caucasian kids becoming addicted at a faster rate than anyone else,” Britta says. Executives and professionals are another large contingent of patients seeking help. “We see lots of super overachievers who are under an intense amount of pressure and folks who are generally unhappy about their life’s journey, and are selfmedicating,” she says. When patients become medically ill, Britta and her team collaborate with Dr. Ramon Bataller, a highly regarded GI specialist at UNC whose dedication to patients with advanced liver disease is saving lives. “We’re seeing amazing progress,” Britta says. “It’s rewarding beyond anything I ever dreamed I would be a part of.” With such an intense job, Britta understands the importance of self-

care. One of her favorite places to rejuvenate is Chapel of the Cross, listening to the choir and organ music. “For me, it’s as spiritual as standing in the middle of the Vatican,” she says. The chapel’s organist, Dr. Wylie S. Quinn, was Britta’s religion professor and a close friend of her father, Timothy Hesla. Her father, who died from alcoholism, was instrumental in helping Britta realize her potential. As someone who is personally and professionally passionate about treating individuals who struggle with mental health and addiction disorders, she is driven to keep making a difference. And at a time when insurance companies don’t want to pay for mental health services, Britta feels very fortunate to have leaders such as Dan Lehman, Mel Hurston and Chris Ellington who support and encourage her in this work. – MP