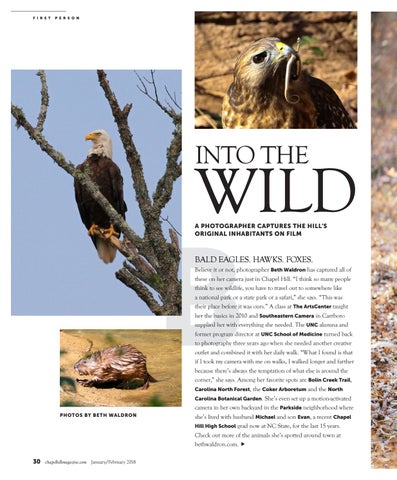 A PHOTOGRAPHER CAPTURES THE HILL’S ORIGINAL INHABITANTS ON FILM

Believe it or not, photographer Beth Waldron has captured all of these on her camera just in Chapel Hill. “I think so many people think to see wildlife, you have to travel out to somewhere like a national park or a state park or a safari,” she says. “This was their place before it was ours.” A class at The ArtsCenter taught her the basics in 2010 and Southeastern Camera in Carrboro supplied her with everything she needed. The UNC alumna and former program director at UNC School of Medicine turned back to photography three years ago when she needed another creative outlet and combined it with her daily walk. “What I found is that if I took my camera with me on walks, I walked longer and farther because there’s always the temptation of what else is around the corner,” she says. Among her favorite spots are Bolin Creek Trail, Carolina North Forest, the Coker Arboretum and the North Carolina Botanical Garden. She’s even set up a motion-activated camera in her own backyard in the Parkside neighborhood where she’s lived with husband Michael and son Evan, a recent Chapel Hill High School grad now at NC State, for the last 15 years. Check out more of the animals she’s spotted around town at bethwaldron.com.