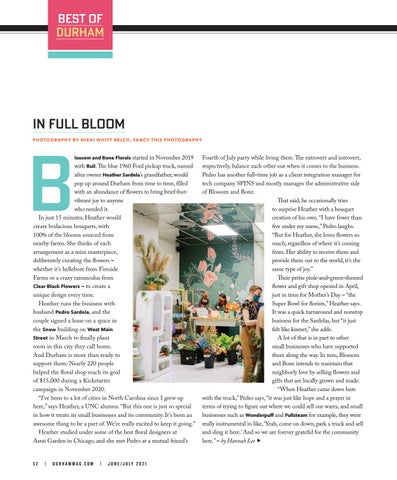 with Buil. The blue 1960 Ford pickup truck, named after owner Heather Sardela’s grandfather, would pop up around Durham from time to time, filled with an abundance of flowers to bring brief-butvibrant joy to anyone who needed it. In just 15 minutes, Heather would create bodacious bouquets, with 100% of the blooms sourced from nearby farms. She thinks of each arrangement as a mini masterpiece, deliberately curating the flowers – whether it’s hellebore from Fireside Farms or a crazy ranunculus from Clear Black Flowers – to create a unique design every time. Heather runs the business with husband Pedro Sardela, and the couple signed a lease on a space in the Snow building on West Main Street in March to finally plant roots in this city they call home. And Durham is more than ready to support them: Nearly 220 people helped the floral shop reach its goal of $15,000 during a Kickstarter campaign in November 2020. “I’ve been to a lot of cities in North Carolina since I grew up here,” says Heather, a UNC alumna. “But this one is just so special in how it treats its small businesses and its community. It’s been an awesome thing to be a part of. We’re really excited to keep it going.” Heather studied under some of the best floral designers at Asrai Garden in Chicago, and she met Pedro at a mutual friend’s

Fourth of July party while living there. The extrovert and introvert, respectively, balance each other out when it comes to the business. Pedro has another full-time job as a client integration manager for tech company SPINS and mostly manages the administrative side of Blossom and Bone. That said, he occasionally tries to surprise Heather with a bouquet creation of his own. “I have fewer than five under my name,” Pedro laughs. “But for Heather, she loves flowers so much, regardless of where it’s coming from. Her ability to receive them and provide them out to the world, it’s the same type of joy.” Their petite pink-and-green-themed flower and gift shop opened in April, just in time for Mother’s Day – “the Super Bowl for florists,” Heather says. It was a quick turnaround and nonstop business for the Sardelas, but “it just felt like kismet,” she adds. A lot of that is in part to other small businesses who have supported them along the way. In turn, Blossom and Bone intends to maintain that neighborly love by selling flowers and gifts that are locally grown and made. “When Heather came down here with the truck,” Pedro says, “it was just like hope and a prayer in terms of trying to figure out where we could sell our wares, and small businesses such as Wonderpuff and Fullsteam for example, they were really instrumental in like, ‘Yeah, come on down, park a truck and sell and sling it here.’ And so we are forever grateful for the community here.” – by Hannah Lee 