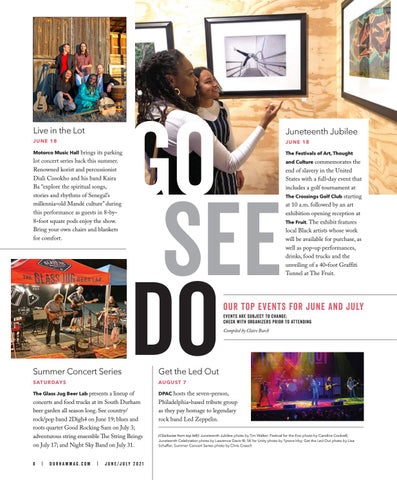 brings its parking lot concert series back this summer. Renowned korist and percussionist Diali Cissokho and his band Kaira Ba “explore the spiritual songs, stories and rhythms of Senegal’s millennia-old Mandé culture” during this performance as guests in 8-by8-foot square pods enjoy the show. Bring your own chairs and blankets for comfort. Motorco Music Hall

commemorates the end of slavery in the United States with a full-day event that includes a golf tournament at The Crossings Golf Club starting at 10 a.m. followed by an art exhibition opening reception at The Fruit. The exhibit features local Black artists whose work will be available for purchase, as well as pop-up performances, drinks, food trucks and the unveiling of a 40-foot Graffiti Tunnel at The Fruit. and Culture

OUR TOP EVENTS FOR JUNE AND JULY EVENTS ARE SUBJECT TO CHANGE; CHECK WITH ORGANIZERS PRIOR TO ATTENDING Compiled by Claire Burch

The Glass Jug Beer Lab presents a lineup of

Get the Led Out