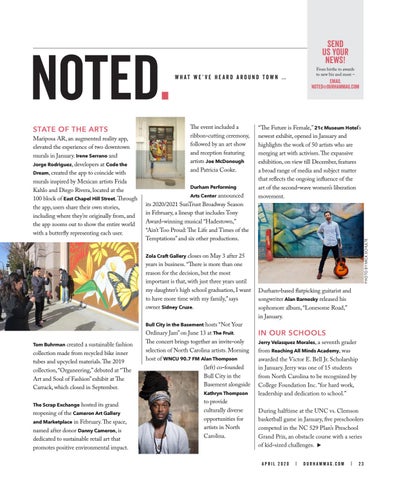 STATE OF THE ARTS

Mariposa AR, an augmented reality app, elevated the experience of two downtown murals in January. Irene Serrano and Jorge Rodriguez, developers at Code the Dream, created the app to coincide with murals inspired by Mexican artists Frida Kahlo and Diego Rivera, located at the 100 block of East Chapel Hill Street. Through the app, users share their own stories, including where they’re originally from, and the app zooms out to show the entire world with a butterfly representing each user.

its 2020/2021 SunTrust Broadway Season in February, a lineup that includes Tony Award-winning musical “Hadestown,” “Ain’t Too Proud: The Life and Times of the Temptations” and six other productions.

“The Future is Female,” 21c Museum Hotel’s newest exhibit, opened in January and highlights the work of 50 artists who are merging art with activism. The expansive exhibition, on view till December, features a broad range of media and subject matter that reflects the ongoing influence of the art of the second-wave women’s liberation movement.

Zola Craft Gallery closes on May 3 after 25

years in business. “There is more than one reason for the decision, but the most important is that, with just three years until my daughter’s high school graduation, I want to have more time with my family,” says owner Sidney Cruze. Bull City in the Basement hosts “Not Your Tom Buhrman created a sustainable fashion

collection made from recycled bike inner tubes and upcycled materials. The 2019 collection, “Organeering,” debuted at “The Art and Soul of Fashion” exhibit at The Carrack, which closed in September. The Scrap Exchange hosted its grand

reopening of the Cameron Art Gallery and Marketplace in February. The space, named after donor Danny Cameron, is dedicated to sustainable retail art that promotes positive environmental impact.

Ordinary Jam” on June 13 at The Fruit. The concert brings together an invite-only selection of North Carolina artists. Morning host of WNCU 90.7 FM Alan Thompson (left) co-founded Bull City in the Basement alongside Kathryn Thompson

to provide culturally diverse opportunities for artists in North Carolina.

Jerry Velasquez Morales, a seventh grader from Reaching All Minds Academy, was awarded the Victor E. Bell Jr. Scholarship in January. Jerry was one of 15 students from North Carolina to be recognized by College Foundation Inc. “for hard work, leadership and dedication to school.”

During halftime at the UNC vs. Clemson basketball game in January, five preschoolers competed in the NC 529 Plan’s Preschool Grand Prix, an obstacle course with a series of kid-sized challenges.  April 2020