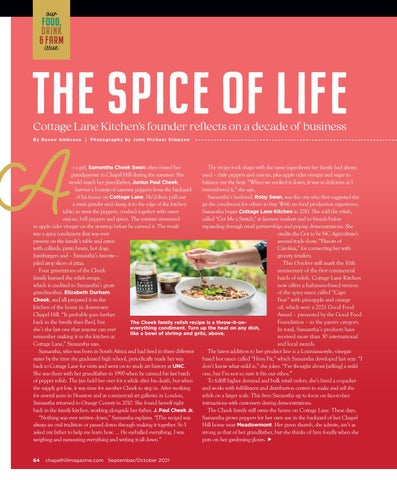 s a girl, Samantha Cheek Swan often visited her The recipe took shape with the same ingredients her family had always grandparents in Chapel Hill during the summer. She used – chile peppers and onions, plus apple cider vinegar and sugar to would watch her grandfather, Junius Paul Cheek, balance out the heat. “When we cooked it down, it was as delicious as I harvest a bounty of cayenne peppers from the backyard remembered it,” she says. of his house on Cottage Lane. He’d then pull out Samantha’s husband, Roby Swan, was the one who first suggested she a meat grinder and clamp it to the edge of the kitchen jar the condiment for others to buy. With no food production experience, table; in went the peppers, crushed together with sweet Samantha began Cottage Lane Kitchen in 2011. She sold the relish, onions, bell peppers and spices. The mixture simmered called “Get Me a Switch,&quot; at farmers markets and to friends before in apple cider vinegar on the stovetop before he canned it. The result expanding through retail partnerships and pop-up demonstrations. She was a spicy condiment that was evercredits the Got to be NC Agriculture&#39;s present on the family’s table and eaten annual trade show, “Flavors of with collards, pinto beans, hot dogs, Carolina,” for connecting her with hamburgers and – Samantha’s favorite – grocery retailers. piled atop slices of pizza. This October will mark the 10th Four generations of the Cheek anniversary of the first commercial family learned the relish recipe, batch of relish. Cottage Lane Kitchen which is credited to Samantha’s greatnow offers a habanero-based version grandmother, Elizabeth Durham of the spicy sauce called “Cape Cheek, and all prepared it in the Fear” with pineapple and orange kitchen of the home in downtown oil, which won a 2021 Good Food Chapel Hill. “It probably goes further Award – presented by the Good Food back in the family than [her], but Foundation – in the pantry category. The Cheek family relish recipe is a throw-it-oneverything condiment. Turn up the heat on any dish, she’s the last one that anyone can ever In total, Samantha’s products have like a bowl of shrimp and grits, above. remember making it in the kitchen at received more than 30 international Cottage Lane,” Samantha says. and local awards. Samantha, who was born in South Africa and had lived in three different The latest addition to her product line is a Louisiana-style, vinegarstates by the time she graduated high school, periodically made her way based hot sauce called “Hissy Fit,” which Samantha developed last year. “I back to Cottage Lane for visits and went on to study art history at UNC. don’t know what mild is,” she jokes. “I’ve thought about [selling] a mild She was there with her grandfather in 1990 when he canned his last batch one, but I’m not so sure it fits our ethos.” of pepper relish. The jars held her over for a while after his death, but when To fulfill higher demand and bulk retail orders, she’s hired a co-packer the supply got low, it was time for another Cheek to step in. After working and works with fulfillment and distribution centers to make and sell the for several years in Houston and at commercial art galleries in London, relish on a larger scale. This frees Samantha up to focus on face-to-face Samantha returned to Orange County in 2010. She found herself right interactions with customers during demonstrations. back in the family kitchen, working alongside her father, J. Paul Cheek Jr. The Cheek family still owns the house on Cottage Lane. These days, “Nothing was ever written down,” Samantha explains. “[The recipe] was Samantha grows peppers for her own use in the backyard of her Chapel always an oral tradition or passed down through making it together. So I Hill home near Meadowmont. Her green thumb, she admits, isn’t as asked my father to help me learn how. … He eyeballed everything. I was strong as that of her grandfather, but she thinks of him fondly when she weighing and measuring everything and writing it all down.” puts on her gardening gloves.  64