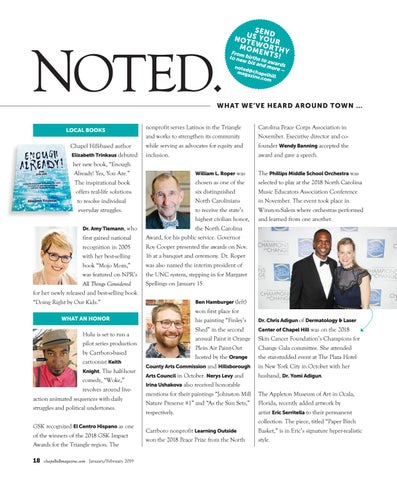 Hulu is set to run a pilot series production by Carrboro-based cartoonist Keith Knight. The half-hour comedy, “Woke,” revolves around liveaction animated sequences with daily struggles and political undertones. GSK recognized El Centro Hispano as one of the winners of the 2018 GSK Impact Awards for the Triangle region. The 18

nonprofit serves Latinos in the Triangle and works to strengthen its community while serving as advocates for equity and inclusion. William L. Roper was

chosen as one of the six distinguished North Carolinians to receive the state’s highest civilian honor, the North Carolina Award, for his public service. Governor Roy Cooper presented the awards on Nov. 16 at a banquet and ceremony. Dr. Roper was also named the interim president of the UNC system, stepping in for Margaret Spellings on January 15.

Carolina Peace Corps Association in November. Executive director and cofounder Wendy Banning accepted the award and gave a speech. The Phillips Middle School Orchestra was selected to play at the 2018 North Carolina Music Educators Association Conference in November. The event took place in Winston-Salem where orchestras performed and learned from one another.

Dr. Chris Adigun of Dermatology &amp; Laser Center of Chapel Hill was on the 2018

Skin Cancer Foundation’s Champions for Change Gala committee. She attended the star-studded event at The Plaza Hotel in New York City in October with her husband, Dr. Yomi Adigun. The Appleton Museum of Art in Ocala, Florida, recently added artwork by artist Eric Serritella to their permanent collection. The piece, titled “Paper Birch Basket,” is in Eric’s signature hyper-realistic style.