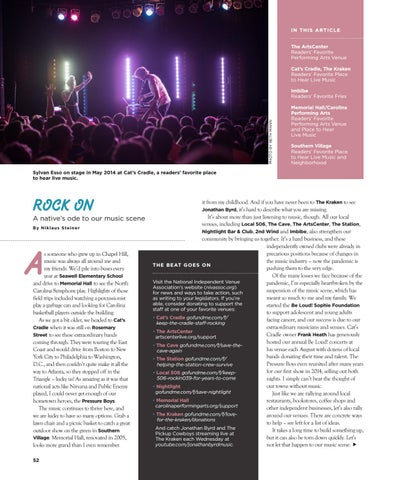 Sylvan Esso on stage in May 2014 at Cat’s Cradle, a readers’ favorite place to hear live music.

s someone who grew up in Chapel Hill, music was always all around me and my friends. We’d pile into buses every year at Seawell Elementary School and drive to Memorial Hall to see the North Carolina Symphony play. Highlights of those field trips included watching a percussionist play a garbage can and looking for Carolina basketball players outside the building. As we got a bit older, we headed to Cat’s Cradle when it was still on Rosemary Street to see these extraordinary bands coming through. They were touring the East Coast and would drive from Boston to New York City to Philadelphia to Washington, D.C., and then couldn’t quite make it all the way to Atlanta, so they stopped off in the Triangle – lucky us! As amazing as it was that national acts like Nirvana and Public Enemy played, I could never get enough of our hometown heroes, the Pressure Boys. The music continues to thrive here, and we are lucky to have so many options. Grab a lawn chair and a picnic basket to catch a great outdoor show on the green in Southern Village. Memorial Hall, renovated in 2005, looks more grand than I even remember 52

it from my childhood. And if you have never been to The Kraken to see Jonathan Byrd, it’s hard to describe what you are missing. It’s about more than just listening to music, though. All our local venues, including Local 506, The Cave, The ArtsCenter, The Station, Nightlight Bar & Club, 2nd Wind and Imbibe, also strengthen our community by bringing us together. It’s a hard business, and these independently owned clubs were already in precarious positions because of changes in the music industry – now the pandemic is T H E B E AT G O E S O N pushing them to the very edge. Of the many losses we face because of the Visit the National Independent Venue pandemic, I’m especially heartbroken by the Association’s website (nivassoc.org) suspension of the music scene, which has for news and ways to take action, such meant so much to me and my family. We as writing to your legislators. If you’re able, consider donating to support the started the Be Loud! Sophie Foundation staff at one of your favorite venues: to support adolescent and young adults • Cat’s Cradle gofundme.com/f/ facing cancer, and our success is due to our keep-the-cradle-staff-rocking extraordinary musicians and venues. Cat’s • The ArtsCenter Cradle owner Frank Heath has generously artscenterlive.org/support hosted our annual Be Loud! concerts at • The Cave gofundme.com/f/save-thehis venue each August with dozens of local cave-again bands donating their time and talent. The • The Station gofundme.com/f/ Pressure Boys even reunited after many years helping-the-station-crew-survive for our first show in 2014, selling out both • Local 506 gofundme.com/f/keep506-rockin039-for-years-to-come nights. I simply can’t bear the thought of our towns without music. • Nightlight gofundme.com/f/save-nightlight Just like we are rallying around local • Memorial Hall restaurants, bookstores, coffee shops and carolinaperformingarts.org/support other independent businesses, let’s also rally • The Kraken gofundme.com/f/lovearound our venues. There are concrete ways for-the-kraken/donations to help – see left for a list of ideas. And catch Jonathan Byrd and The It takes a long time to build something up, Pickup Cowboys streaming live at but it can also be torn down quickly. Let’s The Kraken each Wednesday at youtube.com/jonathanbyrdmusic. not let that happen to our music scene. 