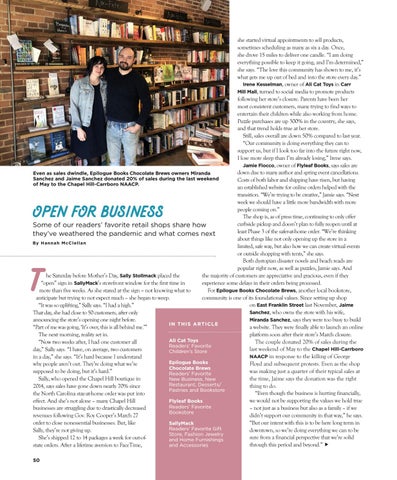 she started virtual appointments to sell products, sometimes scheduling as many as six a day. Once, she drove 15 miles to deliver one candle. “I am doing everything possible to keep it going, and I’m determined,” she says. “The love this community has shown to me, it’s what gets me up out of bed and into the store every day.” Irene Kesselman, owner of Ali Cat Toys in Carr Mill Mall, turned to social media to promote products following her store’s closure. Parents have been her most consistent customers, many trying to find ways to entertain their children while also working from home. Puzzle purchases are up 300% in the country, she says, and that trend holds true at her store. Still, sales overall are down 50% compared to last year. “Our community is doing everything they can to support us, but if I look too far into the future right now, I lose more sleep than I’m already losing,” Irene says. Jamie Fiocco, owner of Flyleaf Books, says sales are down due to many author and spring event cancellations. Even as sales dwindle, Epilogue Books Chocolate Brews owners Miranda Sanchez and Jaime Sanchez donated 20% of sales during the last weekend Costs of both labor and shipping have risen, but having of May to the Chapel Hill-Carrboro NAACP. an established website for online orders helped with the transition. “We’re trying to be creative,” Jamie says. “Next week we should have a little more bandwidth with more people coming on.” The shop is, as of press time, continuing to only offer curbside pickup and doesn’t plan to fully reopen until at Some of our readers’ favorite retail shops share how least Phase 3 of the safer-at-home order. “We’re thinking they’ve weathered the pandemic and what comes next about things like not only opening up the store in a By H an n ah M c C l e l lan limited, safe way, but also how we can create virtual events or outside shopping with tents,” she says. Both dystopian disaster novels and beach reads are popular right now, as well as puzzles, Jamie says. And the majority of customers are appreciative and gracious, even if they he Saturday before Mother’s Day, Sally Stollmack placed the experience some delays in their orders being processed. “open” sign in SallyMack’s storefront window for the first time in For Epilogue Books Chocolate Brews, another local bookstore, more than five weeks. As she stared at the sign – not knowing what to community is one of its foundational values. Since setting up shop anticipate but trying to not expect much – she began to weep. on East Franklin Street last November, Jaime “It was so uplifting,” Sally says. “I had a high.” Sanchez, who owns the store with his wife, That day, she had close to 50 customers, after only Miranda Sanchez, says they were too busy to build announcing the store’s opening one night before. I N TH I S A R TI C L E a website. They were finally able to launch an online “Part of me was going, ‘It’s over, this is all behind me.’” platform soon after their store’s March closure. The next morning, reality set in. Ali Cat Toys The couple donated 20% of sales during the “Now two weeks after, I had one customer all Readers’ Favorite last weekend of May to the Chapel Hill-Carrboro day,” Sally says. “I have, on average, two customers Children’s Store NAACP in response to the killing of George in a day,” she says. “It’s hard because I understand Epilogue Books Floyd and subsequent protests. Even as the shop why people aren’t out. They’re doing what we’re Chocolate Brews was making just a quarter of their typical sales at supposed to be doing, but it’s hard.” Readers’ Favorite the time, Jaime says the donation was the right Sally, who opened the Chapel Hill boutique in New Business, New Restaurant, Desserts/ thing to do. 2014, says sales have gone down nearly 70% since Pastries and Bookstore “Even though the business is hurting financially, the North Carolina stay-at-home order was put into we would not be supporting the values we hold true effect. And she’s not alone – many Chapel Hill Flyleaf Books Readers’ Favorite – not just as a business but also as a family – if we businesses are struggling due to drastically decreased Bookstore didn’t support our community in that way,” he says. revenues following Gov. Roy Cooper’s March 27 “But our intent with this is to be here long term in order to close nonessential businesses. But, like SallyMack Readers’ Favorite Gift downtown, so we’re doing everything we can to be Sally, they’re not giving up. Store, Fashion Jewelry sure from a financial perspective that we’re solid She’s shipped 12 to 14 packages a week for out-ofand Home Furnishings through this period and beyond.”  state orders. After a lifetime aversion to FaceTime, and Accessories