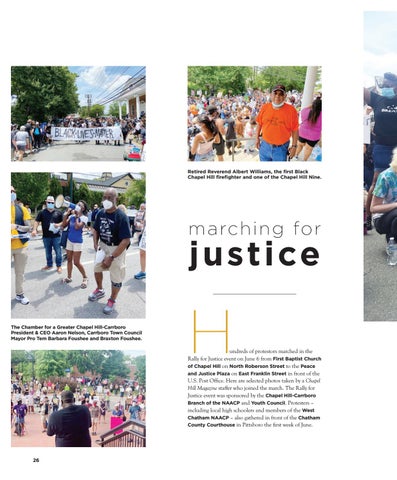 undreds of protestors marched in the Rally for Justice event on June 6 from First Baptist Church of Chapel Hill on North Roberson Street to the Peace and Justice Plaza on East Franklin Street in front of the U.S. Post Office. Here are selected photos taken by a Chapel Hill Magazine staffer who joined the march. The Rally for Justice event was sponsored by the Chapel Hill-Carrboro Branch of the NAACP and Youth Council. Protesters â&#x20AC;&#x201C; including local high schoolers and members of the West Chatham NAACP â&#x20AC;&#x201C; also gathered in front of the Chatham County Courthouse in Pittsboro the first week of June.