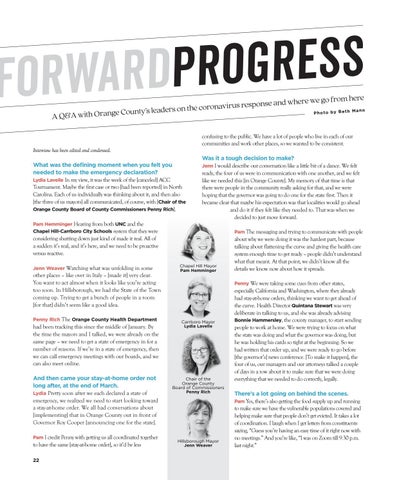 re we go from here he w d an se on sp re s naviru Ma nn y’s leaders on the coro nt ou Ph ot o by Be th C e ng ra O ith w A Q&A confusing to the public. We have a lot of people who live in each of our communities and work other places, so we wanted to be consistent.

Interview has been edited and condensed. What was the defining moment when you felt you needed to make the emergency declaration? Lydia Lavelle In my view, it was the week of the [canceled] ACC Tournament. Maybe the first case or two [had been reported] in North Carolina. Each of us individually was thinking about it, and then also [the three of us mayors] all communicated, of course, with [Chair of the Orange County Board of County Commissioners Penny Rich].

Was it a tough decision to make? Jenn I would describe our conversation like a little bit of a dance. We felt ready, the four of us were in communication with one another, and we felt like we needed this [in Orange County]. My memory of that time is that there were people in the community really asking for that, and we were hoping that the governor was going to do one for the state first. Then it became clear that maybe his expectation was that localities would go ahead and do it if they felt like they needed to. That was when we decided to just move forward.

Pam The messaging and trying to communicate with people

considering shutting down just kind of made it real. All of a sudden it’s real, and it’s here, and we need to be proactive versus reactive. Jenn Weaver Watching what was unfolding in some

other places – like over in Italy – [made it] very clear. You want to act almost when it looks like you’re acting too soon. In Hillsborough, we had the State of the Town coming up. Trying to get a bunch of people in a room [for that] didn’t seem like a good idea. Penny Rich The Orange County Health Department

had been tracking this since the middle of January. By the time the mayors and I talked, we were already on the same page – we need to get a state of emergency in for a number of reasons. If we’re in a state of emergency, then we can call emergency meetings with our boards, and we can also meet online. And then came your stay-at-home order not long after, at the end of March. Lydia Pretty soon after we each declared a state of emergency, we realized we need to start looking toward a stay-at-home order. We all had conversations about [implementing] that in Orange County out in front of Governor Roy Cooper [announcing one for the state]. Pam I credit Penny with getting us all coordinated together

about why we were doing it was the hardest part, because talking about flattening the curve and giving the health care system enough time to get ready – people didn’t understand what that meant. At that point, we didn’t know all the details we know now about how it spreads. Penny We were taking some cues from other states,

Chair of the Orange County Board of Commissioners Penny Rich

especially California and Washington, where they already had stay-at-home orders, thinking we want to get ahead of the curve. Health Director Quintana Stewart was very deliberate in talking to us, and she was already advising Bonnie Hammersley, the county manager, to start sending people to work at home. We were trying to focus on what the state was doing and what the governor was doing, but he was holding his cards so tight at the beginning. So we had written that order up, and we were ready to go before [the governor’s] news conference. [To make it happen], the four of us, our managers and our attorneys talked a couple of days in a row about it to make sure that we were doing everything that we needed to do correctly, legally. There’s a lot going on behind the scenes. Pam Yes, there’s also getting the food supply up and running to make sure we have the vulnerable populations covered and helping make sure that people don’t get evicted. It takes a lot of coordination. I laugh when I get letters from constituents saying, “Guess you’re having an easy time of it right now with no meetings.” And you’re like, “I was on Zoom till 9:30 p.m. last night.”