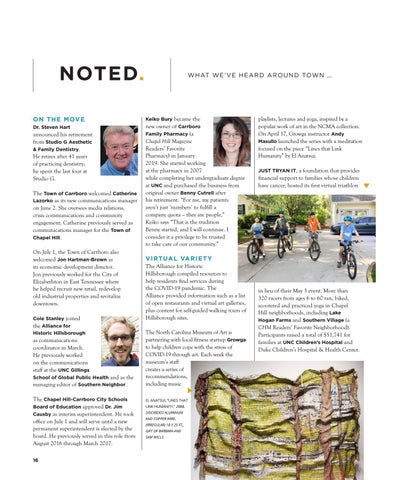 announced his retirement from Studio G Aesthetic & Family Dentistry. He retires after 41 years of practicing dentistry; he spent the last four at Studio G. The Town of Carrboro welcomed Catherine Lazorko as its new communications manager on June 2. She oversees media relations, crisis communications and community engagement. Catherine previously served as communications manager for the Town of Chapel Hill. On July 1, the Town of Carrboro also welcomed Jon Hartman-Brown as its economic development director. Jon previously worked for the City of Elizabethton in East Tennessee where he helped recruit new retail, redevelop old industrial properties and revitalize downtown. Cole Stanley joined the Alliance for Historic Hillsborough

as communications coordinator in March. He previously worked on the communications staff at the UNC Gillings School of Global Public Health and as the managing editor of Southern Neighbor.

The Chapel Hill-Carrboro City Schools Board of Education approved Dr. Jim Causby as interim superintendent. He took office on July 1 and will serve until a new permanent superintendent is elected by the board. He previously served in this role from August 2016 through March 2017. 16

Chapel Hill Magazine Readers’ Favorite Pharmacy) in January 2019. She started working at the pharmacy in 2007 while completing her undergraduate degree at UNC and purchased the business from original owner Benny Cutrell after his retirement. “For me, my patients aren’t just ‘numbers’ to fulfill a company quota – they are people,” Keiko says “That is the tradition Benny started, and I will continue. I consider it a privilege to be trusted to take care of our community.”

playlists, lectures and yoga, inspired by a popular work of art in the NCMA collection. On April 17, Growga instructor Andy Masullo launched the series with a meditation focused on the piece “Lines that Link Humanity” by El Anatsui. JUST TRYAN IT, a foundation that provides

financial support to families whose children have cancer, hosted its first virtual triathlon

VIRTUAL VARIETY The Alliance for Historic Hillsborough compiled resources to help residents find services during the COVID-19 pandemic. The Alliance provided information such as a list of open restaurants and virtual art galleries, plus content for self-guided walking tours of Hillsborough sites. The North Carolina Museum of Art is partnering with local fitness startup Growga to help children cope with the stress of COVID-19 through art. Each week the museum’s staff creates a series of recommendations, including music EL ANATSUI, “LINES THAT LINK HUMANITY,” 2008, DISCARDED ALUMINUM AND COPPER WIRE, (IRREGULAR) 18 X 25 FT., GIFT OF BARBARA AND SAM WELLS

in lieu of their May 3 event. More than 320 racers from ages 6 to 60 ran, biked, scootered and practiced yoga in Chapel Hill neighborhoods, including Lake Hogan Farms and Southern Village (a CHM Readers’ Favorite Neighborhood). Participants raised a total of $51,741 for families at UNC Children’s Hospital and Duke Children’s Hospital & Health Center.