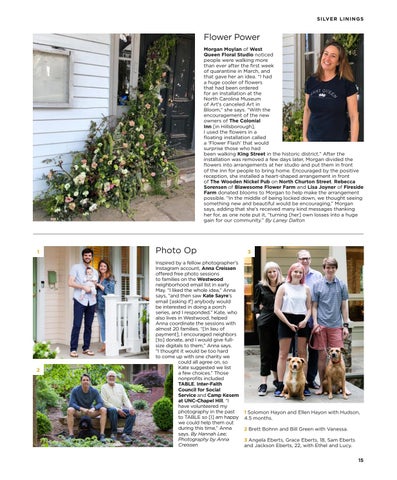 Flower Power Morgan Moylan of West Queen Floral Studio noticed people were walking more than ever after the first week of quarantine in March, and that gave her an idea. “I had a huge cooler of flowers that had been ordered for an installation at the North Carolina Museum of Art’s canceled Art in Bloom,” she says. “With the encouragement of the new owners of The Colonial Inn [in Hillsborough], I used the flowers in a floating installation called a ‘Flower Flash’ that would surprise those who had been walking King Street in the historic district.” After the installation was removed a few days later, Morgan divided the flowers into arrangements at her studio and put them in front of the inn for people to bring home. Encouraged by the positive reception, she installed a heart-shaped arrangement in front of The Wooden Nickel Pub on North Churton Street. Rebecca Sorensen of Blawesome Flower Farm and Lisa Joyner of Fireside Farm donated blooms to Morgan to help make the arrangement possible. “In the middle of being locked down, we thought seeing something new and beautiful would be encouraging,” Morgan says, adding that she’s received many kind messages thanking her for, as one note put it, “turning [her] own losses into a huge gain for our community.” By Laney Dalton

Photo Op Inspired by a fellow photographer’s Instagram account, Anna Creissen offered free photo sessions to families on the Westwood neighborhood email list in early May. “I liked the whole idea,” Anna says, “and then saw Kate Sayre’s email [asking if] anybody would be interested in doing a porch series, and I responded.” Kate, who also lives in Westwood, helped Anna coordinate the sessions with almost 20 families. “[In lieu of payment], I encouraged neighbors [to] donate, and I would give fullsize digitals to them,” Anna says. “I thought it would be too hard to come up with one charity we could all agree on, so Kate suggested we list a few choices.” Those nonprofits included TABLE, Inter-Faith Council for Social Service and Camp Kesem at UNC-Chapel Hill. “I have volunteered my photography in the past to TABLE so [I] am happy we could help them out during this time,” Anna says. By Hannah Lee; Photography by Anna Creissen