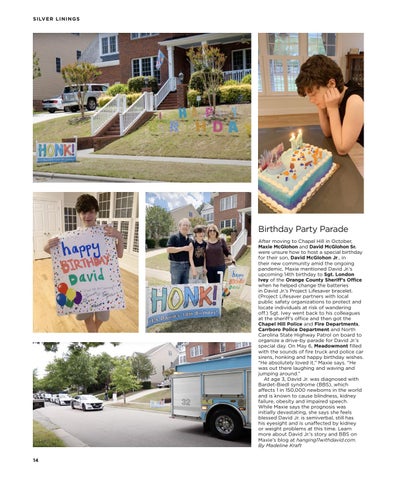 Birthday Party Parade After moving to Chapel Hill in October, Maxie McGlohon and David McGlohon Sr. were unsure how to host a special birthday for their son, David McGlohon Jr., in their new community amid the ongoing pandemic. Maxie mentioned David Jr.’s upcoming 14th birthday to Sgt. London Ivey of the Orange County Sheriff’s Office when he helped change the batteries in David Jr.’s Project Lifesaver bracelet. (Project Lifesaver partners with local public safety organizations to protect and locate individuals at risk of wandering off.) Sgt. Ivey went back to his colleagues at the sheriff’s office and then got the Chapel Hill Police and Fire Departments, Carrboro Police Department and North Carolina State Highway Patrol on board to organize a drive-by parade for David Jr.’s special day. On May 6, Meadowmont filled with the sounds of fire truck and police car sirens, honking and happy birthday wishes. “He absolutely loved it,” Maxie says. “He was out there laughing and waving and jumping around.” At age 3, David Jr. was diagnosed with Bardet-Biedl syndrome (BBS), which affects 1 in 150,000 newborns in the world and is known to cause blindness, kidney failure, obesity and impaired speech. While Maxie says the prognosis was initially devastating, she says she feels blessed David Jr. is semiverbal, still has his eyesight and is unaffected by kidney or weight problems at this time. Learn more about David Jr.’s story and BBS on Maxie’s blog at hanging11withdavid.com. By Madeline Kraft 14