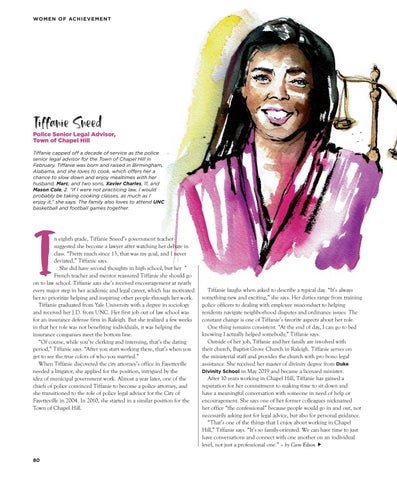 Police Senior Legal Advisor, Town of Chapel Hill Tiffanie capped off a decade of service as the police senior legal advisor for the Town of Chapel Hill in February. Tiffanie was born and raised in Birmingham, Alabama, and she loves to cook, which offers her a chance to slow down and enjoy mealtimes with her husband, Marc, and two sons, Xavier Charles, 11, and Mason Cole, 2. “If I were not practicing law, I would probably be taking cooking classes, as much as I enjoy it,” she says. The family also loves to attend UNC basketball and football games together.

n eighth grade, Tiffanie Sneed’s government teacher suggested she become a lawyer after watching her debate in class. “Pretty much since 13, that was my goal, and I never deviated,” Tiffanie says. She did have second thoughts in high school, but her French teacher and mentor reassured Tiffanie she should go on to law school. Tiffanie says she’s received encouragement at nearly every major step in her academic and legal career, which has motivated her to prioritize helping and inspiring other people through her work. Tiffanie graduated from Yale University with a degree in sociology and received her J.D. from UNC. Her first job out of law school was for an insurance defense firm in Raleigh. But she realized a few weeks in that her role was not benefiting individuals, it was helping the insurance companies meet the bottom line. “Of course, while you’re clerking and interning, that’s the dating period,” Tiffanie says. “After you start working there, that’s when you get to see the true colors of who you married.” When Tiffanie discovered the city attorney’s office in Fayetteville needed a litigator, she applied for the position, intrigued by the idea of municipal government work. Almost a year later, one of the chiefs of police convinced Tiffanie to become a police attorney, and she transitioned to the role of police legal advisor for the City of Fayetteville in 2004. In 2010, she started in a similar position for the Town of Chapel Hill.

Tiffanie laughs when asked to describe a typical day. “It’s always something new and exciting,” she says. Her duties range from training police officers to dealing with employee misconduct to helping residents navigate neighborhood disputes and ordinance issues. The constant change is one of Tiffanie’s favorite aspects about her role. One thing remains consistent. “At the end of day, I can go to bed knowing I actually helped somebody,” Tiffanie says. Outside of her job, Tiffanie and her family are involved with their church, Baptist Grove Church in Raleigh. Tiffanie serves on the ministerial staff and provides the church with pro bono legal assistance. She received her master of divinity degree from Duke Divinity School in May 2019 and became a licensed minister. After 10 years working in Chapel Hill, Tiffanie has gained a reputation for her commitment to making time to sit down and have a meaningful conversation with someone in need of help or encouragement. She says one of her former colleagues nicknamed her office “the confessional” because people would go in and out, not necessarily asking just for legal advice, but also for personal guidance. “That’s one of the things that I enjoy about working in Chapel Hill,” Tiffanie says. “It’s so family-oriented. We can have time to just have conversations and connect with one another on an individual level, not just a professional one.” – by Cam Edson 