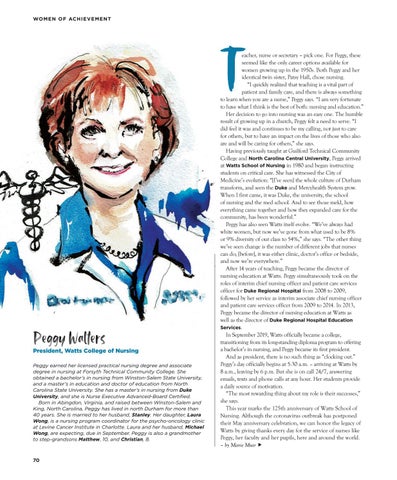 President, Watts College of Nursing Peggy earned her licensed practical nursing degree and associate degree in nursing at Forsyth Technical Community College. She obtained a bachelor’s in nursing from Winston-Salem State University, and a master’s in education and doctor of education from North Carolina State University. She has a master’s in nursing from Duke University, and she is Nurse Executive Advanced-Board Certified. Born in Abingdon, Virginia, and raised between Winston-Salem and King, North Carolina, Peggy has lived in north Durham for more than 40 years. She is married to her husband, Stanley. Her daughter, Laura Wong, is a nursing program coordinator for the psycho-oncology clinic at Levine Cancer Institute in Charlotte. Laura and her husband, Michael Wong, are expecting, due in September. Peggy is also a grandmother to step-grandsons Matthew, 10, and Christian, 8.

eacher, nurse or secretary – pick one. For Peggy, these seemed like the only career options available for women growing up in the 1950s. Both Peggy and her identical twin sister, Patsy Hall, chose nursing. “I quickly realized that teaching is a vital part of patient and family care, and there is always something to learn when you are a nurse,” Peggy says. “I am very fortunate to have what I think is the best of both: nursing and education.” Her decision to go into nursing was an easy one. The humble result of growing up in a church, Peggy felt a need to serve. “I did feel it was and continues to be my calling, not just to care for others, but to have an impact on the lives of those who also are and will be caring for others,” she says. Having previously taught at Guilford Technical Community College and North Carolina Central University, Peggy arrived at Watts School of Nursing in 1980 and began instructing students on critical care. She has witnessed the City of Medicine’s evolution: “[I’ve seen] the whole culture of Durham transform, and seen the Duke and Mercyhealth System grow. When I first came, it was Duke, the university, the school of nursing and the med school. And to see those meld, how everything came together and how they expanded care for the community, has been wonderful.” Peggy has also seen Watts itself evolve. “We’ve always had white women, but now we’ve gone from what used to be 8% or 9% diversity of our class to 54%,” she says. “The other thing we’ve seen change is the number of different jobs that nurses can do; [before], it was either clinic, doctor’s office or bedside, and now we’re everywhere.” After 14 years of teaching, Peggy became the director of nursing education at Watts. Peggy simultaneously took on the roles of interim chief nursing officer and patient care services officer for Duke Regional Hospital from 2008 to 2009, followed by her service as interim associate chief nursing officer and patient care services officer from 2009 to 2014. In 2013, Peggy became the director of nursing education at Watts as well as the director of Duke Regional Hospital Education Services. In September 2019, Watts officially became a college, transitioning from its long-standing diploma program to offering a bachelor’s in nursing, and Peggy became its first president. And as president, there is no such thing as “clocking out.” Peggy’s day officially begins at 5:30 a.m. – arriving at Watts by 8 a.m., leaving by 6 p.m. But she is on call 24/7, answering emails, texts and phone calls at any hour. Her students provide a daily source of motivation. “The most rewarding thing about my role is their successes,” she says. This year marks the 125th anniversary of Watts School of Nursing. Although the coronavirus outbreak has postponed their May anniversary celebration, we can honor the legacy of Watts by giving thanks every day for the service of nurses like Peggy, her faculty and her pupils, here and around the world. – by Marie Muir 