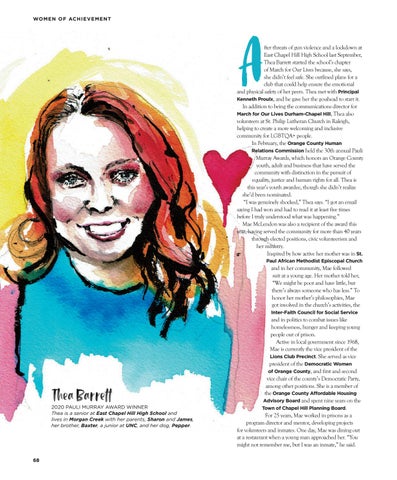 fter threats of gun violence and a lockdown at East Chapel Hill High School last September, Thea Barrett started the school’s chapter of March for Our Lives because, she says, she didn’t feel safe. She outlined plans for a club that could help ensure the emotional and physical safety of her peers. Thea met with Principal Kenneth Proulx, and he gave her the go-ahead to start it. In addition to being the communications director for March for Our Lives Durham-Chapel Hill, Thea also volunteers at St. Philip Lutheran Church in Raleigh, helping to create a more welcoming and inclusive community for LGBTQA+ people. In February, the Orange County Human Relations Commission held the 30th annual Pauli Murray Awards, which honors an Orange County youth, adult and business that have served the community with distinction in the pursuit of equality, justice and human rights for all. Thea is this year’s youth awardee, though she didn’t realize she’d been nominated. “I was genuinely shocked,” Thea says. “I got an email saying I had won and had to read it at least five times before I truly understood what was happening.” Mae McLendon was also a recipient of the award this year, having served the community for more than 40 years through elected positions, civic volunteerism and her ministry. Inspired by how active her mother was in St. Paul African Methodist Episcopal Church

and in her community, Mae followed suit at a young age. Her mother told her, “We might be poor and have little, but there’s always someone who has less.” To honor her mother’s philosophies, Mae got involved in the church’s activities, the Inter-Faith Council for Social Service

2020 PAULI MURRAY AWARD WINNER Thea is a senior at East Chapel Hill High School and lives in Morgan Creek with her parents, Sharon and James, her brother, Baxter, a junior at UNC, and her dog, Pepper.

and in politics to combat issues like homelessness, hunger and keeping young people out of prison. Active in local government since 1968, Mae is currently the vice president of the Lions Club Precinct. She served as vice president of the Democratic Women of Orange County, and first and second vice chair of the county’s Democratic Party, among other positions. She is a member of the Orange County Affordable Housing Advisory Board and spent nine years on the Town of Chapel Hill Planning Board. For 25 years, Mae worked in prisons as a program director and mentor, developing projects for volunteers and inmates. One day, Mae was dining out at a restaurant when a young man approached her. “You might not remember me, but I was an inmate,” he said.