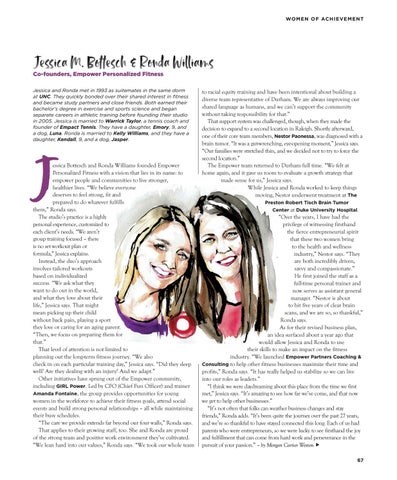 Jessica and Ronda met in 1993 as suitemates in the same dorm at UNC. They quickly bonded over their shared interest in fitness and became study partners and close friends. Both earned their bachelor’s degree in exercise and sports science and began separate careers in athletic training before founding their studio in 2005. Jessica is married to Warrick Taylor, a tennis coach and founder of Empact Tennis. They have a daughter, Emory, 9, and a dog, Luna. Ronda is married to Kelly Williams, and they have a daughter, Kendall, 9, and a dog, Jasper.

essica Bottesch and Ronda Williams founded Empower Personalized Fitness with a vision that lies in its name: to empower people and communities to live stronger, healthier lives. “We believe everyone deserves to feel strong, fit and prepared to do whatever fulfills them,” Ronda says. The studio’s practice is a highly personal experience, customized to each client’s needs. “We aren’t group training focused – there is no set workout plan or formula,” Jessica explains. Instead, the duo’s approach involves tailored workouts based on individualized success. “We ask what they want to do out in the world, and what they love about their life,” Jessica says. That might mean picking up their child without back pain, playing a sport they love or caring for an aging parent. “Then, we focus on preparing them for that.” That level of attention is not limited to planning out the long-term fitness journey. “We also check in on each particular training day,” Jessica says. “Did they sleep well? Are they dealing with an injury? And we adapt.” Other initiatives have sprung out of the Empower community, including GIRL Power. Led by CFO (Chief Fun Officer) and trainer Amanda Fontaine, the group provides opportunities for young women in the workforce to achieve their fitness goals, attend social events and build strong personal relationships – all while maintaining their busy schedules. “The care we provide extends far beyond our four walls,” Ronda says. That applies to their growing staff, too. She and Ronda are proud of the strong team and positive work environment they’ve cultivated. “We lean hard into our values,” Ronda says. “We took our whole team

to racial equity training and have been intentional about building a diverse team representative of Durham. We are always improving our shared language as humans, and we can’t support the community without taking responsibility for that.” That support system was challenged, though, when they made the decision to expand to a second location in Raleigh. Shortly afterward, one of their core team members, Nestor Paonessa, was diagnosed with a brain tumor. “It was a gut-wrenching, eye-opening moment,” Jessica says. “Our families were stretched thin, and we decided not to try to force the second location.” The Empower team returned to Durham full time. “We felt at home again, and it gave us room to evaluate a growth strategy that made sense for us,” Jessica says. While Jessica and Ronda worked to keep things moving, Nestor underwent treatment at The Preston Robert Tisch Brain Tumor Center at Duke University Hospital.

“Over the years, I have had the privilege of witnessing firsthand the fierce entrepreneurial spirit that these two women bring to the health and wellness industry,” Nestor says. “They are both incredibly driven, savvy and compassionate.” He first joined the staff as a full-time personal trainer and now serves as assistant general manager. “Nestor is about to hit five years of clear brain scans, and we are so, so thankful,” Ronda says. As for their revised business plan, an idea surfaced about a year ago that would allow Jessica and Ronda to use their skills to make an impact on the fitness industry. “We launched Empower Partners Coaching & Consulting to help other fitness businesses maximize their time and profits,” Ronda says. “It has really helped us stabilize so we can live into our roles as leaders.” “I think we were daydreaming about this place from the time we first met,” Jessica says. “It’s amazing to see how far we’ve come, and that now we get to help other businesses.” “It’s not often that folks can weather business changes and stay friends,” Ronda adds. “It’s been quite the journey over the past 27 years, and we’re so thankful to have stayed connected this long. Each of us had parents who were entrepreneurs, so we were lucky to see firsthand the joy and fulfillment that can come from hard work and perseverance in the pursuit of your passion.” – by Morgan Cartier Weston  67