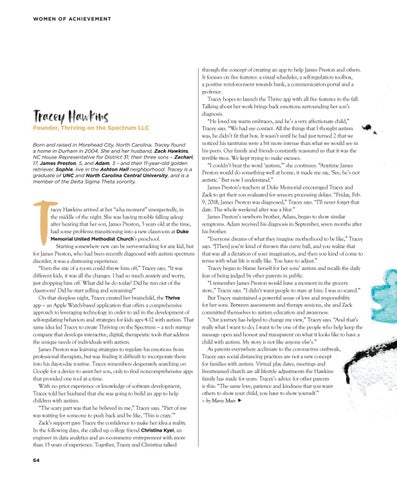 Founder, Thriving on the Spectrum LLC Born and raised in Morehead City, North Carolina, Tracey found a home in Durham in 2004. She and her husband, Zack Hawkins, NC House Representative for District 31, their three sons – Zachari, 17, James Preston, 5, and Adam, 3 – and their 11-year-old golden retriever, Sophie, live in the Ashton Hall neighborhood. Tracey is a graduate of UNC and North Carolina Central University, and is a member of the Delta Sigma Theta sorority.

racey Hawkins arrived at her “a-ha moment” unexpectedly, in the middle of the night. She was having trouble falling asleep after hearing that her son, James Preston, 3 years old at the time, had some problems transitioning into a new classroom at Duke Memorial United Methodist Church’s preschool. Starting somewhere new can be nerve-wracking for any kid, but for James Preston, who had been recently diagnosed with autism spectrum disorder, it was a distressing experience. “Even the size of a room could throw him off,” Tracey says. “It was different kids, it was all the changes. I had so much anxiety and worry, just dropping him off. What did he do today? Did he run out of the classroom? Did he start yelling and screaming?” On that sleepless night, Tracey created her brainchild, the Thrive app – an Apple Watch-based application that offers a comprehensive approach to leveraging technology in order to aid in the development of self-regulating behaviors and strategies for kids ages 4-12 with autism. That same idea led Tracey to create Thriving on the Spectrum – a tech startup company that develops interactive, digital, therapeutic tools that address the unique needs of individuals with autism. James Preston was learning strategies to regulate his emotions from professional therapists, but was finding it difficult to incorporate them into his day-to-day routine. Tracey remembers desperately searching on Google for a device to assist her son, only to find noncomprehensive apps that provided one tool at a time. With no prior experience or knowledge of software development, Tracey told her husband that she was going to build an app to help children with autism. “The scary part was that he believed in me,” Tracey says. “Part of me was waiting for someone to push back and be like, ‘This is crazy.’” Zack’s support gave Tracey the confidence to make her idea a reality. In the following days, she called up college friend Christina Kyei, an engineer in data analytics and an e-commerce entrepreneur with more than 15 years of experience. Together, Tracey and Christina talked 64

through the concept of creating an app to help James Preston and others. It focuses on five features: a visual scheduler, a self-regulation toolbox, a positive reinforcement rewards bank, a communication portal and a geofence. Tracey hopes to launch the Thrive app with all five features in the fall. Talking about her work brings back emotions surrounding her son’s diagnosis. “He loved my warm embraces, and he’s a very affectionate child,” Tracey says. “We had eye contact. All the things that I thought autism was, he didn’t fit that box. It wasn’t until he had just turned 2 that we noticed his tantrums were a bit more intense than what we would see in his peers. Our family and friends constantly reassured us that it was the terrible twos. We kept trying to make excuses. “I couldn’t bear the word ‘autism,’” she continues. “Anytime James Preston would do something well at home, it made me say, ‘See, he’s not autistic.’ But now I understand.” James Preston’s teachers at Duke Memorial encouraged Tracey and Zack to get their son evaluated for sensory processing delays. “Friday, Feb. 9, 2018, James Preston was diagnosed,” Tracey says. “I’ll never forget that date. The whole weekend after was a blur.” James Preston’s newborn brother, Adam, began to show similar symptoms. Adam received his diagnosis in September, seven months after his brother. “Everyone dreams of what they imagine motherhood to be like,” Tracey says. “[Then] you’re kind of thrown this curve ball, and you realize that that was all a dictation of your imagination, and then you kind of come to terms with what life is really like. You have to adjust.” Tracey began to blame herself for her sons’ autism and recalls the daily fear of being judged by other parents in public. “I remember James Preston would have a moment in the grocery store,” Tracey says. “I didn’t want people to stare at him. I was so scared.” But Tracey maintained a powerful sense of love and responsibility for her sons. Between assessments and therapy sessions, she and Zack committed themselves to autism education and awareness. “Our journey has helped to change my view,” Tracey says. “And that’s really what I want to do; I want to be one of the people who help keep the message open and honest and transparent on what it looks like to have a child with autism. My story is not like anyone else’s.” As parents everywhere acclimate to the coronavirus outbreak, Tracey says social distancing practices are not a new concept for families with autism. Virtual play dates, meetings and livestreamed church are all lifestyle adjustments the Hawkins family has made for years. Tracey’s advice for other parents is this: “The same love, patience and kindness that you want others to show your child, you have to show yourself.” – by Marie Muir 