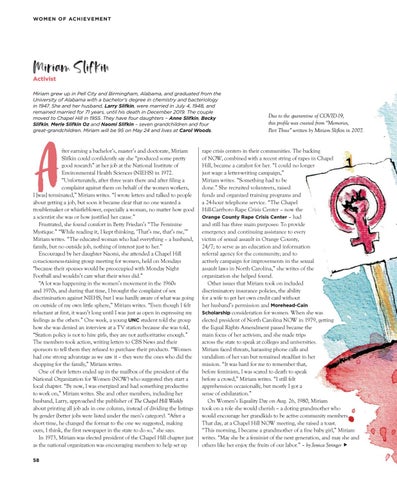 Miriam grew up in Pell City and Birmingham, Alabama, and graduated from the University of Alabama with a bachelor’s degree in chemistry and bacteriology in 1947. She and her husband, Larry Slifkin, were married in July 4, 1948, and remained married for 71 years, until his death in December 2019. The couple moved to Chapel Hill in 1955. They have four daughters – Anne Slifkin, Becky Slifkin, Merle Slifkin Oz and Naomi Slifkin – seven grandchildren and four great-grandchildren. Miriam will be 95 on May 24 and lives at Carol Woods.

fter earning a bachelor’s, master’s and doctorate, Miriam Slifkin could confidently say she “produced some pretty good research” at her job at the National Institute of Environmental Health Sciences (NIEHS) in 1972. “Unfortunately, after three years there and after filing a complaint against them on behalf of the women workers, I [was] terminated,” Miriam writes. “I wrote letters and talked to people about getting a job, but soon it became clear that no one wanted a troublemaker or whistleblower, especially a woman, no matter how good a scientist she was or how justified her cause.” Frustrated, she found comfort in Betty Friedan’s “The Feminine Mystique.” “While reading it, I kept thinking, ‘That’s me, that’s me,’” Miriam writes. “The educated woman who had everything – a husband, family, but no outside job, nothing of interest just to her.” Encouraged by her daughter Naomi, she attended a Chapel Hill consciousness-raising group meeting for women, held on Mondays “because their spouses would be preoccupied with Monday Night Football and wouldn’t care what their wives did.” “A lot was happening in the women’s movement in the 1960s and 1970s, and during that time, I brought the complaint of sex discrimination against NIEHS, but I was hardly aware of what was going on outside of my own little sphere,” Miriam writes. “Even though I felt reluctant at first, it wasn’t long until I was just as open in expressing my feelings as the others.” One week, a young UNC student told the group how she was denied an interview at a TV station because she was told, “Station policy is not to hire girls, they are not authoritative enough.” The members took action, writing letters to CBS News and their sponsors to tell them they refused to purchase their products. “Women had one strong advantage as we saw it – they were the ones who did the shopping for the family,” Miriam writes. One of their letters ended up in the mailbox of the president of the National Organization for Women (NOW) who suggested they start a local chapter. “By now, I was energized and had something productive to work on,” Miriam writes. She and other members, including her husband, Larry, approached the publisher of The Chapel Hill Weekly about printing all job ads in one column, instead of dividing the listings by gender (better jobs were listed under the men’s category). “After a short time, he changed the format to the one we suggested, making ours, I think, the first newspaper in the state to do so,” she says. In 1973, Miriam was elected president of the Chapel Hill chapter just as the national organization was encouraging members to help set up 58

Due to the quarantine of COVID-19, this profile was created from “Memories, Part Three” written by Miriam Slifkin in 2007.

rape crisis centers in their communities. The backing of NOW, combined with a recent string of rapes in Chapel Hill, became a catalyst for her. “I could no longer just wage a letter-writing campaign,” Miriam writes. “Something had to be done.” She recruited volunteers, raised funds and organized training programs and a 24-hour telephone service. “The Chapel Hill-Carrboro Rape Crisis Center – now the Orange County Rape Crisis Center – had and still has three main purposes: To provide emergency and continuing assistance to every victim of sexual assault in Orange County, 24/7; to serve as an education and information referral agency for the community; and to actively campaign for improvements in the sexual assault laws in North Carolina,” she writes of the organization she helped found. Other issues that Miriam took on included discriminatory insurance policies, the ability for a wife to get her own credit card without her husband’s permission and Morehead-Cain Scholarship consideration for women. When she was elected president of North Carolina NOW in 1979, getting the Equal Rights Amendment passed became the main focus of her activism, and she made trips across the state to speak at colleges and universities. Miriam faced threats, harassing phone calls and vandalism of her van but remained steadfast in her mission. “It was hard for me to remember that, before feminism, I was scared to death to speak before a crowd,” Miriam writes. “I still felt apprehension occasionally, but mostly I got a sense of exhilaration.” On Women’s Equality Day on Aug. 26, 1980, Miriam took on a role she would cherish – a doting grandmother who would encourage her grandkids to be active community members. That day, at a Chapel Hill NOW meeting, she raised a toast. “This morning, I became a grandmother of a fine baby girl,” Miriam writes. “May she be a feminist of the next generation, and may she and others like her enjoy the fruits of our labor.” – by Jessica Stringer 