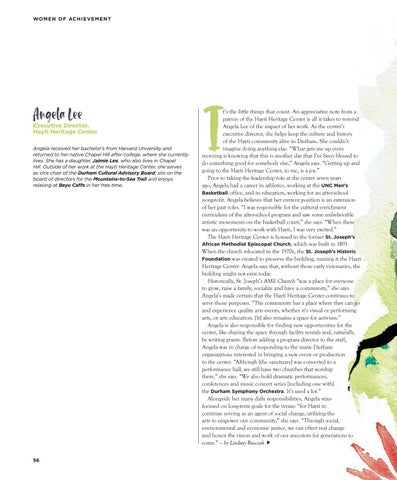 Executive Director, Hayti Heritage Center Angela received her bachelor’s from Harvard University and returned to her native Chapel Hill after college, where she currently lives. She has a daughter, Jaimie Lee, who also lives in Chapel Hill. Outside of her work at the Hayti Heritage Center, she serves as vice chair of the Durham Cultural Advisory Board, sits on the board of directors for the Mountains-to-Sea Trail and enjoys relaxing at Beyu Caffe in her free time.

t’s the little things that count. An appreciative note from a patron of the Hayti Heritage Center is all it takes to remind Angela Lee of the impact of her work. As the center’s executive director, she helps keep the culture and history of the Hayti community alive in Durham. She couldn’t imagine doing anything else. “What gets me up every morning is knowing that this is another day that I’ve been blessed to do something good for somebody else,” Angela says. “Getting up and going to the Hayti Heritage Center, to me, is a joy.” Prior to taking the leadership role at the center seven years ago, Angela had a career in athletics, working at the UNC Men’s Basketball office, and in education, working for an after-school nonprofit. Angela believes that her current position is an extension of her past roles. “I was responsible for the cultural enrichment curriculum of the after-school program and saw some unbelievable artistic movements on the basketball court,” she says. “When there was an opportunity to work with Hayti, I was very excited.” The Hayti Heritage Center is housed in the former St. Joseph’s African Methodist Episcopal Church, which was built in 1891. When the church relocated in the 1970s, the St. Joseph’s Historic Foundation was created to preserve the building, naming it the Hayti Heritage Center. Angela says that, without those early visionaries, the building might not exist today. Historically, St. Joseph’s AME Church “was a place for everyone to grow, raise a family, socialize and have a community,” she says. Angela’s made certain that the Hayti Heritage Center continues to serve those purposes. “The community has a place where they can go and experience quality arts events, whether it’s visual or performing arts, or arts education. [It] also remains a space for activism.” Angela is also responsible for finding new opportunities for the center, like sharing the space through facility rentals and, naturally, by writing grants. Before adding a program director to the staff, Angela was in charge of responding to the many Durham organizations interested in bringing a new event or production to the center. “Although [the sanctuary] was converted to a performance hall, we still have two churches that worship there,” she says. “We also hold dramatic performances, conferences and music concert series [including one with] the Durham Symphony Orchestra. It’s used a lot.” Alongside her many daily responsibilities, Angela stays focused on long-term goals for the venue: “for Hayti to continue serving as an agent of social change, utilizing the arts to empower our community,” she says. “Through social, environmental and economic justice, we can effect real change and honor the vision and work of our ancestors for generations to come.” – by Lindsay Rusczak 