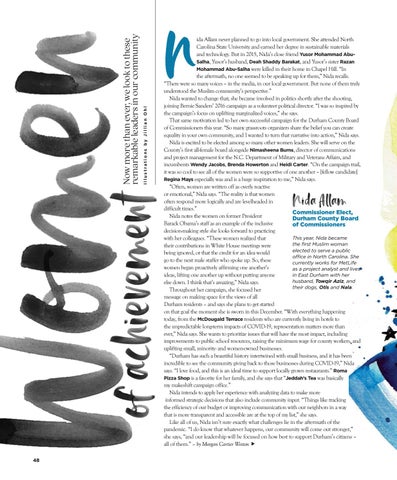 Now more than ever, we look to these remarkable leaders in our community

ida Allam never planned to go into local government. She attended North Carolina State University and earned her degree in sustainable materials and technology. But in 2015, Nida’s close friend Yusor Mohammad AbuSalha, Yusor’s husband, Deah Shaddy Barakat, and Yusor’s sister Razan Mohammad Abu-Salha were killed in their home in Chapel Hill. “In the aftermath, no one seemed to be speaking up for them,” Nida recalls. “There were so many voices – in the media, in our local government. But none of them truly understood the Muslim community’s perspective.” Nida wanted to change that; she became involved in politics shortly after the shooting, joining Bernie Sanders’ 2016 campaign as a volunteer political director. “I was so inspired by the campaign’s focus on uplifting marginalized voices,” she says. That same motivation led to her own successful campaign for the Durham County Board of Commissioners this year. “So many grassroots organizers share the belief you can create equality in your own community, and I wanted to turn that narrative into action,” Nida says. Nida is excited to be elected among so many other women leaders. She will serve on the County’s first all-female board alongside Nimasheena Burns, director of communications and project management for the N.C. Department of Military and Veterans Affairs, and incumbents Wendy Jacobs, Brenda Howerton and Heidi Carter. “On the campaign trail, it was so cool to see all of the women were so supportive of one another – [fellow candidate] Regina Mays especially was and is a huge inspiration to me,” Nida says. “Often, women are written off as overly reactive or emotional,” Nida says. “The reality is that women often respond more logically and are levelheaded in difficult times.” Commissioner Elect, Nida notes the women on former President Durham County Board Barack Obama’s staff as an example of the inclusive of Commissioners decision-making style she looks forward to practicing This year, Nida became with her colleagues. “These women realized that the first Muslim woman their contributions in White House meetings were elected to serve a public being ignored, or that the credit for an idea would office in North Carolina. She go to the next male staffer who spoke up. So, these currently works for MetLife women began proactively affirming one another’s as a project analyst and lives in East Durham with her ideas, lifting one another up without putting anyone husband, Towqir Aziz, and else down. I think that’s amazing,” Nida says. their dogs, Otis and Nala. Throughout her campaign, she focused her message on making space for the views of all Durham residents – and says she plans to get started on that goal the moment she is sworn in this December. “With everything happening today, from the McDougald Terrace residents who are currently living in hotels to the unpredictable long-term impacts of COVID-19, representation matters more than ever,” Nida says. She wants to prioritize issues that will have the most impact, including improvements to public school resources, raising the minimum wage for county workers, and uplifting small, minority- and women-owned businesses. “Durham has such a beautiful history intertwined with small business, and it has been incredible to see the community giving back to those businesses during COVID-19,” Nida says. “I love food, and this is an ideal time to support locally grown restaurants.” Roma Pizza Shop is a favorite for her family, and she says that “Jeddah’s Tea was basically my makeshift campaign office.” Nida intends to apply her experience with analyzing data to make more informed strategic decisions that also include community input. “Things like tracking the efficiency of our budget or improving communication with our neighbors in a way that is more transparent and accessible are at the top of my list,” she says. Like all of us, Nida isn’t sure exactly what challenges lie in the aftermath of the pandemic. “I do know that whatever happens, our community will come out stronger,” she says, “and our leadership will be focused on how best to support Durham’s citizens – all of them.” – by Morgan Cartier Weston 