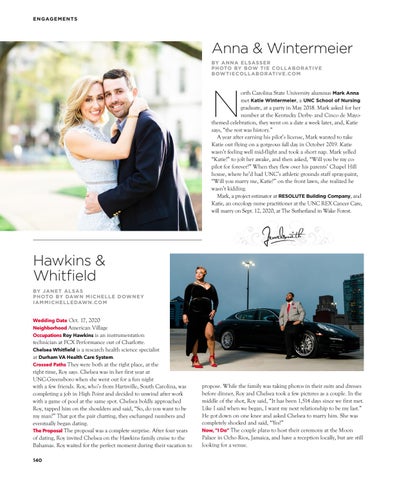 orth Carolina State University alumnus Mark Anna met Katie Wintermeier, a UNC School of Nursing graduate, at a party in May 2018. Mark asked for her number at the Kentucky Derby- and Cinco de Mayothemed celebration, they went on a date a week later, and, Katie says, “the rest was history.” A year after earning his pilot’s license, Mark wanted to take Katie out flying on a gorgeous fall day in October 2019. Katie wasn’t feeling well mid-flight and took a short nap. Mark yelled “Katie!” to jolt her awake, and then asked, “Will you be my copilot for forever?” When they flew over his parents’ Chapel Hill house, where he’d had UNC’s athletic grounds staff spray-paint, “Will you marry me, Katie?” on the front lawn, she realized he wasn’t kidding. Mark, a project estimator at RESOLUTE Building Company, and Katie, an oncology nurse practitioner at the UNC REX Cancer Care, will marry on Sept. 12, 2020, at The Sutherland in Wake Forest.

technician at FCX Performance out of Charlotte. Chelsea Whitfield is a research health science specialist at Durham VA Health Care System. Crossed Paths They were both at the right place, at the right time, Roy says. Chelsea was in her first year at UNC-Greensboro when she went out for a fun night with a few friends. Roy, who’s from Hartsville, South Carolina, was completing a job in High Point and decided to unwind after work with a game of pool at the same spot. Chelsea boldly approached Roy, tapped him on the shoulders and said, “So, do you want to be my man?” That got the pair chatting, they exchanged numbers and eventually began dating. The Proposal The proposal was a complete surprise. After four years of dating, Roy invited Chelsea on the Hawkins family cruise to the Bahamas. Roy waited for the perfect moment during their vacation to 140

propose. While the family was taking photos in their suits and dresses before dinner, Roy and Chelsea took a few pictures as a couple. In the middle of the shot, Roy said, “It has been 1,514 days since we first met. Like I said when we began, I want my next relationship to be my last.” He got down on one knee and asked Chelsea to marry him. She was completely shocked and said, “Yes!” Now, “I Do” The couple plans to host their ceremony at the Moon Palace in Ocho Rios, Jamaica, and have a reception locally, but are still looking for a venue.