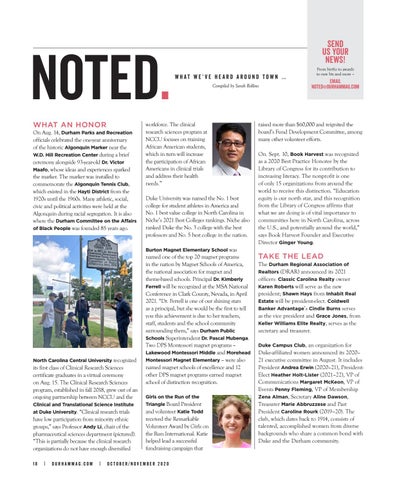 noted. WHAT AN HONOR On Aug. 14, Durham Parks and Recreation officials celebrated the one-year anniversary of the historic Algonquin Marker near the W.D. Hill Recreation Center during a brief ceremony alongside 93-year-old Dr. Victor Maafo, whose ideas and experiences sparked the marker. The marker was installed to commemorate the Algonquin Tennis Club, which existed in the Hayti District from the 1920s until the 1960s. Many athletic, social, civic and political activities were held at the Algonquin during racial segregation. It is also where the Durham Committee on the Affairs of Black People was founded 85 years ago.

Send us your news! WHAT WE’VE HE ARD AROUND TOWN … Compiled by Sarah Rollins

workforce. The clinical research sciences program at NCCU focuses on training African American students, which in turn will increase the participation of African Americans in clinical trials and address their health needs.” Duke University was named the No. 1 best college for student athletes in America and No. 1 best value college in North Carolina in Niche’s 2021 Best Colleges rankings. Niche also ranked Duke the No. 3 college with the best professors and No. 5 best college in the nation. Burton Magnet Elementary School was

named one of the top 20 magnet programs in the nation by Magnet Schools of America, the national association for magnet and theme-based schools. Principal Dr. Kimberly Ferrell will be recognized at the MSA National Conference in Clark County, Nevada, in April 2021. “Dr. Ferrell is one of our shining stars as a principal, but she would be the first to tell you this achievement is due to her teachers, staff, students and the school community surrounding them,” says Durham Public Schools Superintendent Dr. Pascal Mubenga. Two DPS Montessori magnet programs – Lakewood Montessori Middle and Morehead Montessori Magnet Elementary – were also named magnet schools of excellence and 12 other DPS magnet programs earned magnet school of distinction recognition.

have low participation from minority ethnic groups,” says Professor Andy Li, chair of the pharmaceutical sciences department (pictured). “This is partially because the clinical research organizations do not have enough diversified

received the Remarkable Volunteer Award by Girls on the Run International. Katie helped lead a successful fundraising campaign that

raised more than $60,000 and reignited the board’s Fund Development Committee, among many other volunteer efforts. On. Sept. 10, Book Harvest was recognized as a 2020 Best Practice Honoree by the Library of Congress for its contribution to increasing literacy. The nonprofit is one of only 15 organizations from around the world to receive this distinction. “Education equity is our north star, and this recognition from the Library of Congress affirms that what we are doing is of vital importance to communities here in North Carolina, across the U.S., and potentially around the world,” says Book Harvest Founder and Executive Director Ginger Young.