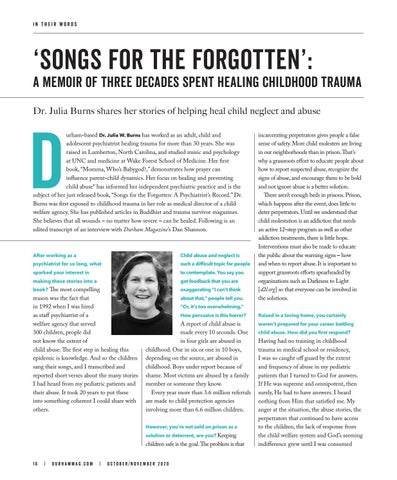 ‘Songs for the Forgotten’:

urham-based Dr. Julia W. Burns has worked as an adult, child and adolescent psychiatrist healing trauma for more than 30 years. She was raised in Lumberton, North Carolina, and studied music and psychology at UNC and medicine at Wake Forest School of Medicine. Her first book, “Momma, Who’s Babygod?,” demonstrates how prayer can influence parent-child dynamics. Her focus on healing and preventing child abuse* has informed her independent psychiatric practice and is the subject of her just released book, “Songs for the Forgotten: A Psychiatrist’s Record.” Dr. Burns was first exposed to childhood trauma in her role as medical director of a child welfare agency. She has published articles in Buddhist and trauma survivor magazines. She believes that all wounds – no matter how severe – can be healed. Following is an edited transcript of an interview with Durham Magazine’s Dan Shannon.

After working as a

Child abuse and neglect is

psychiatrist for so long, what

such a difficult topic for people

sparked your interest in

to contemplate. You say you

making these stories into a

get feedback that you are

The most compelling reason was the fact that in 1992 when I was hired as staff psychiatrist of a welfare agency that served 300 children, people did not know the extent of child abuse. The first step in healing this epidemic is knowledge. And so the children sang their songs, and I transcribed and reported short verses about the many stories I had heard from my pediatric patients and their abuse. It took 20 years to put these into something coherent I could share with others.

about that,” people tell you. “Or, it’s too overwhelming.” How pervasive is this horror?

A report of child abuse is made every 10 seconds. One in four girls are abused in childhood. One in six or one in 10 boys, depending on the source, are abused in childhood. Boys under report because of shame. Most victims are abused by a family member or someone they know. Every year more than 3.6 million referrals are made to child protection agencies involving more than 6.6 million children. However, you’re not sold on prison as a solution or deterrent, are you? Keeping

children safe is the goal. The problem is that 16

incarcerating perpetrators gives people a false sense of safety. More child molesters are living in our neighborhoods than in prison. That’s why a grassroots effort to educate people about how to report suspected abuse, recognize the signs of abuse, and encourage them to be bold and not ignore abuse is a better solution. There aren’t enough beds in prisons. Prison, which happens after the event, does little to deter perpetrators. Until we understand that child molestation is an addiction that needs an active 12-step program as well as other addiction treatments, there is little hope. Interventions must also be made to educate the public about the warning signs – how and when to report abuse. It is important to support grassroots efforts spearheaded by organizations such as Darkness to Light [d2l.org] so that everyone can be involved in the solutions. Raised in a loving home, you certainly weren’t prepared for your career battling child abuse. How did you first respond?

Having had no training in childhood trauma in medical school or residency, I was so caught off guard by the extent and frequency of abuse in my pediatric patients that I turned to God for answers. If He was supreme and omnipotent, then surely, He had to have answers. I heard nothing from Him that satisfied me. My anger at the situation, the abuse stories, the perpetrators that continued to have access to the children, the lack of response from the child welfare system and God’s seeming indifference grew until I was consumed

Songs for the Forgotten 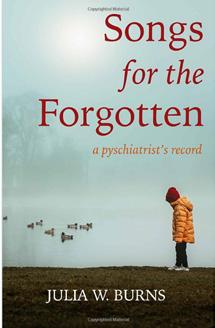 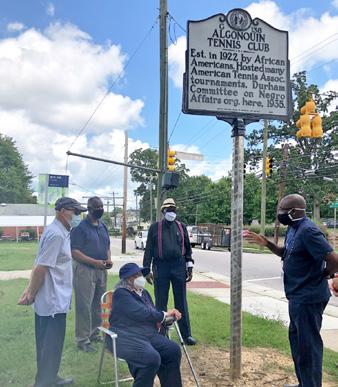 in the Time of COVID 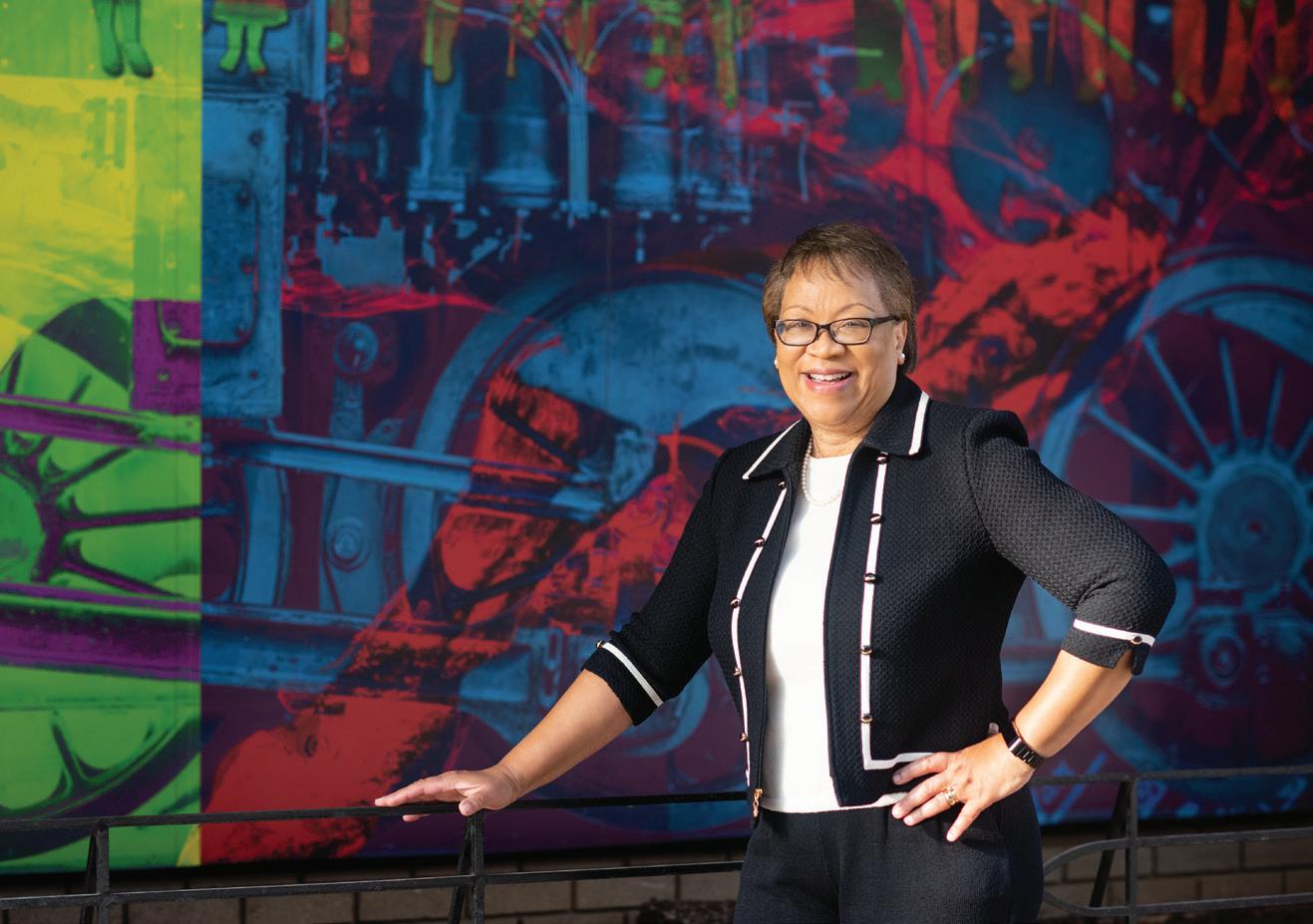 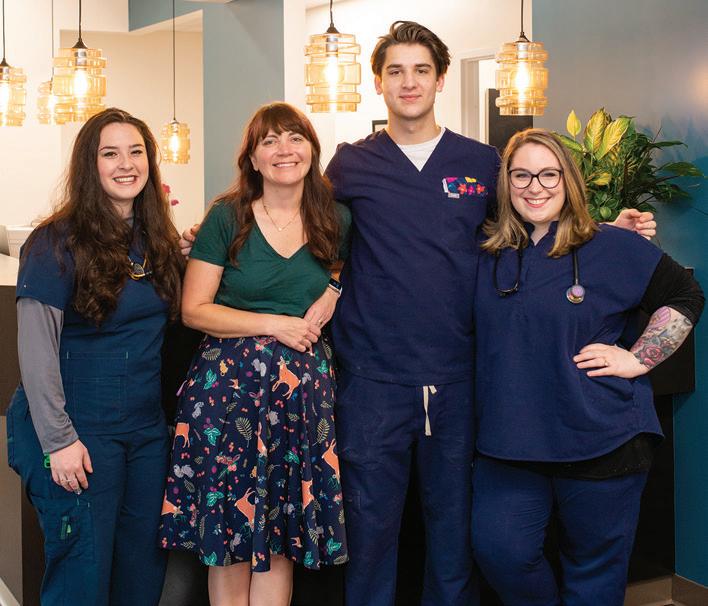 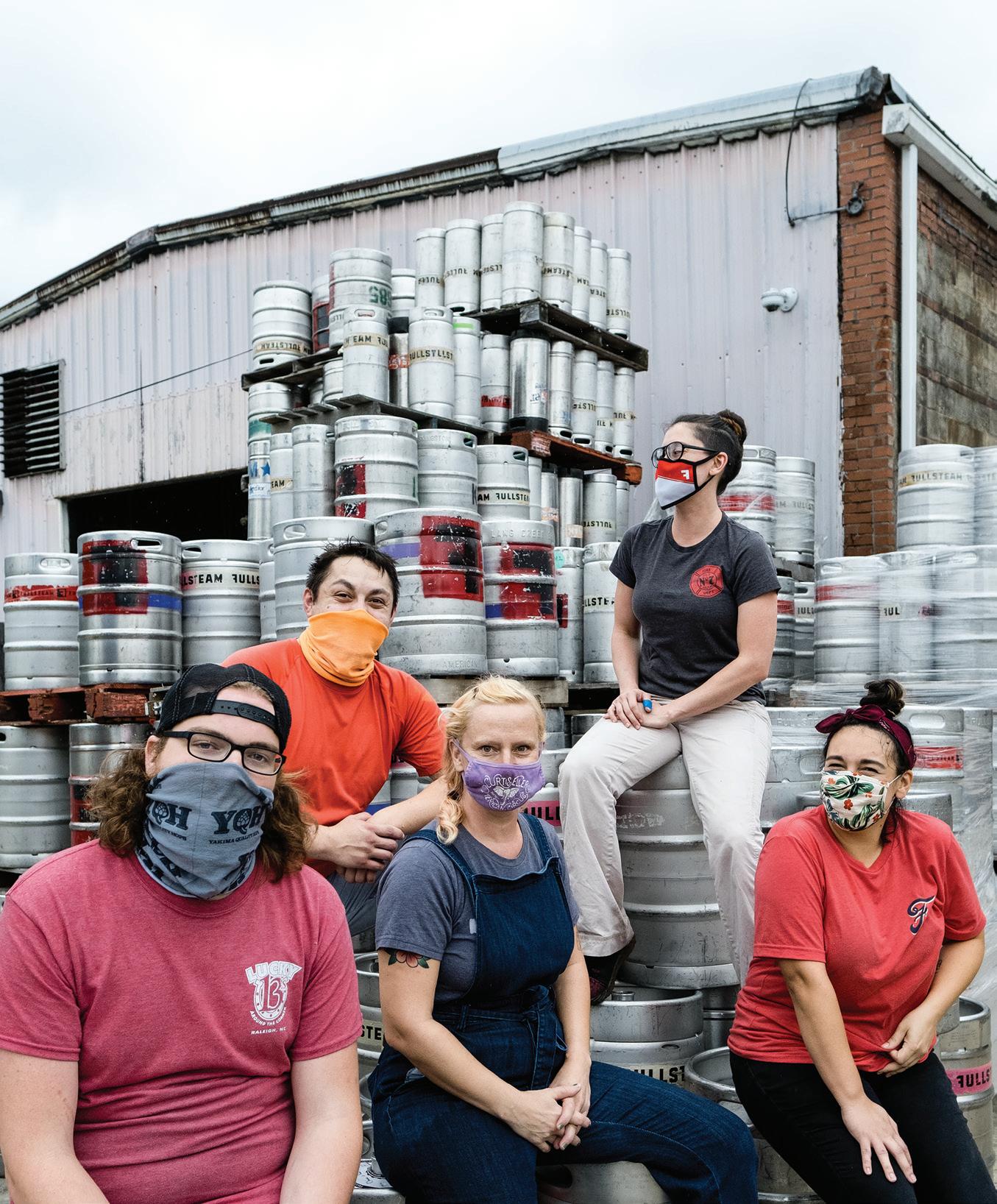