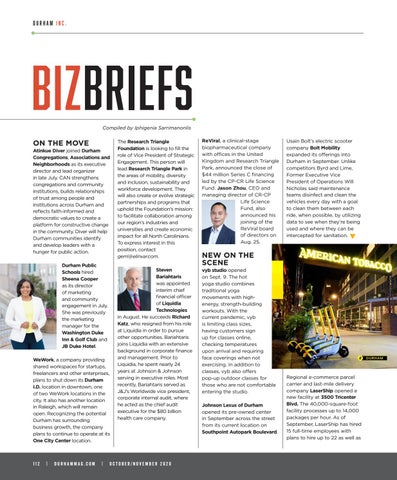 Atinkue Diver joined Durham Congregations, Associations and Neighborhoods as its executive director and lead organizer in late July. CAN strengthens congregations and community institutions, builds relationships of trust among people and institutions across Durham and reflects faith-informed and democratic values to create a platform for constructive change in the community. Diver will help Durham communities identify and develop leaders with a hunger for public action. Durham Public Schools hired Sheena Cooper as its director of marketing and community engagement in July. She was previously the marketing manager for the Washington Duke Inn & Golf Club and JB Duke Hotel. WeWork, a company providing shared workspaces for startups, freelancers and other enterprises, plans to shut down its Durham I.D. location in downtown, one of two WeWork locations in the city. It also has another location in Raleigh, which will remain open. Recognizing the potential Durham has surrounding business growth, the company plans to continue to operate at its One City Center location.

The Research Triangle Foundation is looking to fill the role of Vice President of Strategic Engagement. This person will lead Research Triangle Park in the areas of mobility, diversity and inclusion, sustainability and workforce development. They will also create or evolve strategic partnerships and programs that uphold the Foundation’s mission: to facilitate collaboration among our region’s industries and universities and create economic impact for all North Carolinians. To express interest in this position, contact gerri@elinvar.com.

ReViral, a clinical-stage biopharmaceutical company with offices in the United Kingdom and Research Triangle Park, announced the close of $44 million Series C financing led by the CP-CR Life Science Fund. Jason Zhou, CEO and managing director of CR-CP Life Science Fund, also announced his joining of the ReViral board of directors on Aug. 25.

Steven Bariahtaris was appointed interim chief financial officer of Liquidia Technologies in August. He succeeds Richard Katz, who resigned from his role at Liquidia in order to pursue other opportunities. Bariahtaris joins Liquidia with an extensive background in corporate finance and management. Prior to Liquidia, he spent nearly 24 years at Johnson & Johnson serving in executive roles. Most recently, Bariahtaris served as J&J’s Worldwide vice president, corporate internal audit, where he acted as the chief audit executive for the $80 billion health care company.

vyb studio opened on Sept. 9. The hot yoga studio combines traditional yoga movements with highenergy, strength-building workouts. With the current pandemic, vyb is limiting class sizes, having customers sign up for classes online, checking temperatures upon arrival and requiring face coverings when not exercising. In addition to classes, vyb also offers pop-up outdoor classes for those who are not comfortable entering the studio.

Usain Bolt’s electric scooter company Bolt Mobility expanded its offerings into Durham in September. Unlike competitors Byrd and Lime, Former Executive Vice President of Operations Will Nicholas said maintenance teams disinfect and clean the vehicles every day with a goal to clean them between each ride, when possible, by utilizing data to see when they’re being used and where they can be intercepted for sanitation.

Johnson Lexus of Durham opened its pre-owned center in September across the street from its current location on Southpoint Autopark Boulevard.

Regional e-commerce parcel carrier and last-mile delivery company LaserShip opened a new facility at 3500 Tricenter Blvd. The 40,000-square-foot facility processes up to 14,000 packages per hour. As of September, LaserShip has hired 15 full-time employees with plans to hire up to 22 as well as