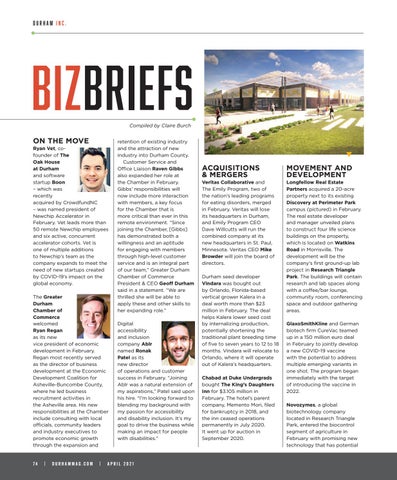 Ryan Vet, cofounder of The Oak House at Durham and software startup Boon – which was recently acquired by CrowdfundNC – was named president of Newchip Accelerator in February. Vet leads more than 50 remote Newchip employees and six active, concurrent accelerator cohorts. Vet is one of multiple additions to Newchip’s team as the company expands to meet the need of new startups created by COVID-19’s impact on the global economy. The Greater Durham Chamber of Commerce welcomed Ryan Regan as its new vice president of economic development in February. Regan most recently served as the director of business development at the Economic Development Coalition for Asheville-Buncombe County, where he led business recruitment activities in the Asheville area. His new responsibilities at the Chamber include consulting with local officials, community leaders and industry executives to promote economic growth through the expansion and

retention of existing industry and the attraction of new industry into Durham County. Customer Service and Office Liaison Raven Gibbs also expanded her role at the Chamber in February. Gibbs’ responsibilities will now include more interaction with members, a key focus for the Chamber that is more critical than ever in this remote environment. “Since joining the Chamber, [Gibbs] has demonstrated both a willingness and an aptitude for engaging with members through high-level customer service and is an integral part of our team,” Greater Durham Chamber of Commerce President &amp; CEO Geoff Durham said in a statement. “We are thrilled she will be able to apply these and other skills to her expanding role.” Digital accessibility and inclusion company Ablr named Ronak Patel as its new director of operations and customer success in February. “Joining Ablr was a natural extension of my aspirations,” Patel said upon his hire. “I’m looking forward to blending my background with my passion for accessibility and disability inclusion. It’s my goal to drive the business while making an impact for people with disabilities.”

Veritas Collaborative and The Emily Program, two of the nation’s leading programs for eating disorders, merged in February. Veritas will lose its headquarters in Durham, and Emily Program CEO Dave Willcutts will run the combined company at its new headquarters in St. Paul, Minnesota. Veritas CEO Mike Browder will join the board of directors. Durham seed developer Vindara was bought out by Orlando, Florida-based vertical grower Kalera in a deal worth more than $23 million in February. The deal helps Kalera lower seed cost by internalizing production, potentially shortening the traditional plant breeding time of five to seven years to 12 to 18 months. Vindara will relocate to Orlando, where it will operate out of Kalera’s headquarters. Chabad at Duke Undergrads bought The King’s Daughters Inn for $3.105 million in February. The hotel’s parent company, Memento Mori, filed for bankruptcy in 2018, and the inn ceased operations permanently in July 2020. It went up for auction in September 2020.

Longfellow Real Estate Partners acquired a 20-acre property next to its existing Discovery at Perimeter Park campus (pictured) in February. The real estate developer and manager unveiled plans to construct four life science buildings on the property, which is located on Watkins Road in Morrisville. The development will be the company’s first ground-up lab project in Research Triangle Park. The buildings will contain research and lab spaces along with a coffee/bar lounge, community room, conferencing space and outdoor gathering areas. GlaxoSmithKline and German biotech firm CureVac teamed up in a 150 million euro deal in February to jointly develop a new COVID-19 vaccine with the potential to address multiple emerging variants in one shot. The program began immediately with the target of introducing the vaccine in 2022. Novozymes, a global biotechnology company located in Research Triangle Park, entered the biocontrol segment of agriculture in February with promising new technology that has potential