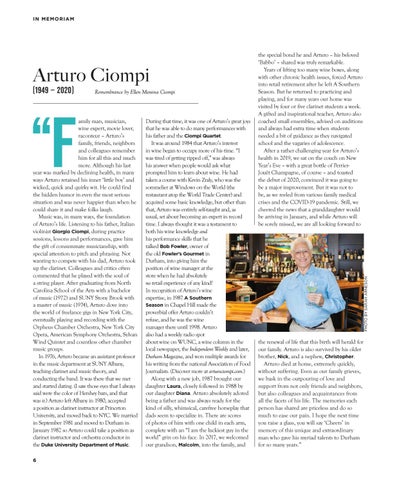 amily man, musician, wine expert, movie lover, raconteur – Arturo’s family, friends, neighbors and colleagues remember him for all this and much more. Although his last year was marked by declining health, in many ways Arturo retained his inner ‘little boy’ and wicked, quick and quirky wit. He could find the hidden humor in even the most serious situation and was never happier than when he could share it and make folks laugh. Music was, in many ways, the foundation of Arturo’s life. Listen­ing to his father, Italian violinist Giorgio Ciompi, during practice sessions, lessons and performances, gave him the gift of consummate musicianship, with special attention to pitch and phrasing. Not wanting to compete with his dad, Arturo took up the clarinet. Colleagues and critics often commented that he played with the soul of a string player. After graduating from North Carolina School of the Arts with a bachelor of music (1972) and SUNY Stony Brook with a master of music (1974), Arturo dove into the world of freelance gigs in New York City, eventually playing and recording with the Orpheus Chamber Orchestra, New York City Opera, American Symphony Orchestra, Sylvan Wind Quintet and countless other chamber music groups. In 1976, Arturo became an assistant professor in the music department at SUNY Albany, teaching clarinet and music theory, and conducting the band. It was there that we met and started dating. (I saw those eyes that I always said were the color of Hershey bars, and that was it.) Arturo left Albany in 1980, accepted a position as clarinet instructor at Princeton University, and moved back to NYC. We married in September 1981 and moved to Durham in January 1982 so Arturo could take a position as clarinet instructor and orchestra conductor in the Duke University Department of Music. 6

During that time, it was one of Arturo’s great joys that he was able to do many perfor­mances with his father and the Ciompi Quartet. It was around 1984 that Arturo’s interest in wine began to occupy more of his time. “I was tired of getting ripped off,” was always his answer when people would ask what prompted him to learn about wine. He had taken a course with Kevin Zraly, who was the sommelier at Windows on the World (the restaurant atop the World Trade Center) and acquired some basic knowledge, but other than that, Arturo was entirely self-taught and, as usual, set about becoming an expert in record time. I always thought it was a testament to both his wine knowledge and his performance skills that he talked Bob Fowler, owner of the old Fowler’s Gourmet in Durham, into giving him the position of wine manager at the store when he had absolutely no retail experience of any kind! In recognition of Arturo’s wine expertise, in 1987 A Southern Season in Chapel Hill made the proverbial offer Arturo couldn’t refuse, and he was the wine manager there until 1998. Arturo also had a weekly radio spot about wine on WUNC, a wine column in the local newspaper, the Independent Weekly and later, Durham Magazine, and won multiple awards for his writing from the national Association of Food Journalists. (Discover more at arturociompi.com.) Along with a new job, 1987 brought our daughter Laura, closely followed in 1988 by our daughter Diana. Arturo absolutely adored being a father and was always ready for the kind of silly, whimsical, carefree horseplay that dads seem to specialize in. There are scores of photos of him with one child in each arm, complete with an “I am the luckiest guy in the world” grin on his face. In 2017, we welcomed our grandson, Malcolm, into the family, and

the special bond he and Arturo – his beloved ‘Babbo’ – shared was truly remarkable. Years of lifting too many wine boxes, along with other chronic health issues, forced Arturo into retail retirement after he left A Southern Season. But he returned to practicing and playing, and for many years our home was visited by four or five clarinet stu­dents a week. A gifted and inspirational teacher, Arturo also coached small ensembles, advised on auditions and always had extra time when students needed a bit of guidance as they navigated school and the vagaries of adolescence. After a rather challenging year for Arturo’s health in 2019, we sat on the couch on New Year’s Eve – with a great bottle of PerrierJouët Champagne, of course – and toasted the debut of 2020, convinced it was going to be a major improvement. But it was not to be, as we reeled from various family medical crises and the COVID-19 pandemic. Still, we cheered the news that a granddaughter would be arriving in January, and while Arturo will be sorely missed, we are all looking forward to

the renewal of life that this birth will herald for our family. Arturo is also survived by his older brother, Nick, and a nephew, Christopher. Arturo died at home, extremely quickly, without suffering. Even as our family grieves, we bask in the outpouring of love and support from not only friends and neighbors, but also colleagues and acquaintances from all the facets of his life. The memories each person has shared are priceless and do so much to ease our pain. I hope the next time you raise a glass, you will say ‘Cheers’ in memory of this unique and extraordinary man who gave his myriad talents to Durham for so many years.”