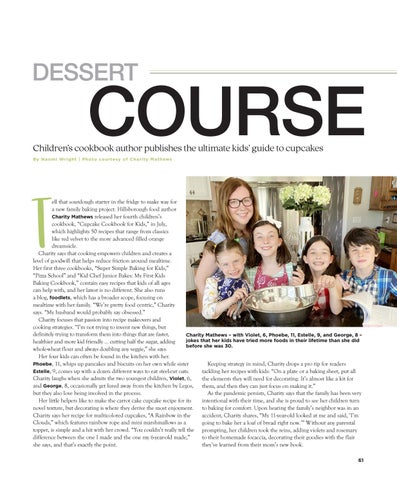 ell that sourdough starter in the fridge to make way for a new family baking project. Hillsborough food author Charity Mathews released her fourth children’s cookbook, “Cupcake Cookbook for Kids,” in July, which highlights 50 recipes that range from classics like red velvet to the more advanced filled orange dreamsicle.   Charity says that cooking empowers children and creates a level of goodwill that helps reduce friction around mealtime. Her first three cookbooks, “Super Simple Baking for Kids,” “Pizza School” and “Kid Chef Junior Bakes: My First Kids Baking Cookbook,” contain easy recipes that kids of all ages can help with, and her latest is no different. She also runs a blog, foodlets, which has a broader scope, focusing on mealtime with her family. “We’re pretty food centric,” Charity says. “My husband would probably say obsessed.” Charity focuses that passion into recipe makeovers and cooking strategies. “I’m not trying to invent new things, but definitely trying to transform them into things that are faster, Charity Mathews – with Violet, 6, Phoebe, 11, Estelle, 9, and George, 8 – jokes that her kids have tried more foods in their lifetime than she did healthier and more kid friendly … cutting half the sugar, adding before she was 30. whole-wheat flour and always doubling any veggie,” she says.   Her four kids can often be found in the kitchen with her. Phoebe, 11, whips up pancakes and biscuits on her own while sister Keeping strategy in mind, Charity drops a pro tip for readers Estelle, 9, comes up with a dozen different ways to eat steel-cut oats. tackling her recipes with kids: “On a plate or a baking sheet, put all Charity laughs when she admits the two youngest children, Violet, 6, the elements they will need for decorating. It’s almost like a kit for and George, 8, occasionally get lured away from the kitchen by Legos, them, and then they can just focus on making it.” but they also love being involved in the process.  As the pandemic persists, Charity says that the family has been very Her little helpers like to make the carrot cake cupcake recipe for its intentional with their time, and she is proud to see her children turn novel texture, but decorating is where they derive the most enjoyment. to baking for comfort. Upon hearing the family’s neighbor was in an Charity says her recipe for multicolored cupcakes, “A Rainbow in the accident, Charity shares, “My 11-year-old looked at me and said, ‘I’m Clouds,” which features rainbow rope and mini marshmallows as a going to bake her a loaf of bread right now.’” Without any parental topper, is simple and a hit with her crowd. “You couldn’t really tell the prompting, her children took the reins, adding violets and rosemary difference between the one I made and the one my 6-year-old made,” to their homemade focaccia, decorating their goodies with the flair she says, and that’s exactly the point.  they’ve learned from their mom’s new book. 61