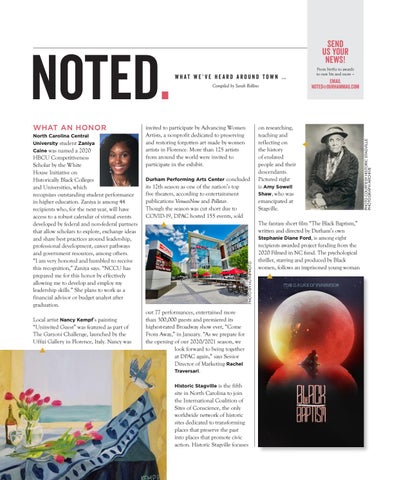 HBCU Competitiveness Scholar by the White House Initiative on Historically Black Colleges and Universities, which recognizes outstanding student performance in higher education. Zaniya is among 44 recipients who, for the next year, will have access to a robust calendar of virtual events developed by federal and non-federal partners that allow scholars to explore, exchange ideas and share best practices around leadership, professional development, career pathways and government resources, among others. “I am very honored and humbled to receive this recognition,” Zaniya says. “NCCU has prepared me for this honor by effectively allowing me to develop and employ my leadership skills.” She plans to work as a financial advisor or budget analyst after graduation. Local artist Nancy Kempf’s painting “Uninvited Guest” was featured as part of The Garzoni Challenge, launched by the Uffizi Gallery in Florence, Italy. Nancy was

its 12th season as one of the nation’s top five theaters, according to entertainment publications VenuesNow and Pollstar. Though the season was cut short due to COVID-19, DPAC hosted 155 events, sold

out 77 performances, entertained more than 300,000 guests and premiered its highest-rated Broadway show ever, “Come From Away,” in January. “As we prepare for the opening of our 2020/2021 season, we look forward to being together at DPAC again,” says Senior Director of Marketing Rachel Traversari. Historic Stagville is the fifth

site in North Carolina to join the International Coalition of Sites of Conscience, the only worldwide network of historic sites dedicated to transforming places that preserve the past into places that promote civic action. Historic Stagville focuses 16

on researching, teaching and reflecting on the history of enslaved people and their descendants. Pictured right is Amy Sowell Shaw, who was emancipated at Stagville. The fantasy short film “The Black Baptism,” written and directed by Durham’s own Stephanie Diane Ford, is among eight recipients awarded project funding from the 2020 Filmed in NC fund. The psychological thriller, starring and produced by Black women, follows an imprisoned young woman