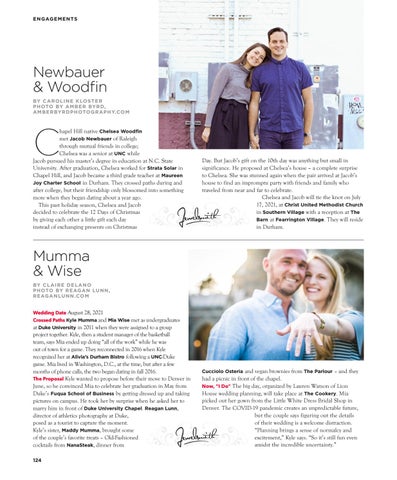 hapel Hill native Chelsea Woodfin met Jacob Newbauer of Raleigh through mutual friends in college; Chelsea was a senior at UNC while Jacob pursued his master’s degree in education at N.C. State University. After graduation, Chelsea worked for Strata Solar in Chapel Hill, and Jacob became a third grade teacher at Maureen Joy Charter School in Durham. They crossed paths during and after college, but their friendship only blossomed into something more when they began dating about a year ago. This past holiday season, Chelsea and Jacob decided to celebrate the 12 Days of Christmas by giving each other a little gift each day instead of exchanging presents on Christmas

Day. But Jacob’s gift on the 10th day was anything but small in significance. He proposed at Chelsea’s house – a complete surprise to Chelsea. She was stunned again when the pair arrived at Jacob’s house to find an impromptu party with friends and family who traveled from near and far to celebrate. Chelsea and Jacob will tie the knot on July 17, 2021, at Christ United Methodist Church in Southern Village with a reception at The Barn at Fearrington Village. They will reside in Durham.

project together. Kyle, then a student manager of the basketball team, says Mia ended up doing “all of the work” while he was out of town for a game. They reconnected in 2016 when Kyle recognized her at Alivia’s Durham Bistro following a UNC-Duke game. Mia lived in Washington, D.C., at the time, but after a few months of phone calls, the two began dating in fall 2016. The Proposal Kyle wanted to propose before their move to Denver in June, so he convinced Mia to celebrate her graduation in May from Duke’s Fuqua School of Business by getting dressed up and taking pictures on campus. He took her by surprise when he asked her to marry him in front of Duke University Chapel. Reagan Lunn, director of athletics photography at Duke, posed as a tourist to capture the moment. Kyle’s sister, Maddy Mumma, brought some of the couple’s favorite treats – Old-Fashioned cocktails from NanaSteak, dinner from 124

Cucciolo Osteria and vegan brownies from The Parlour – and they had a picnic in front of the chapel. Now, “I Do” The big day, organized by Lauren Watson of Lion House wedding planning, will take place at The Cookery. Mia picked out her gown from the Little White Dress Bridal Shop in Denver. The COVID-19 pandemic creates an unpredictable future, but the couple says figuring out the details of their wedding is a welcome distraction. “Planning brings a sense of normalcy and excitement,” Kyle says. “So it’s still fun even amidst the incredible uncertainty.”