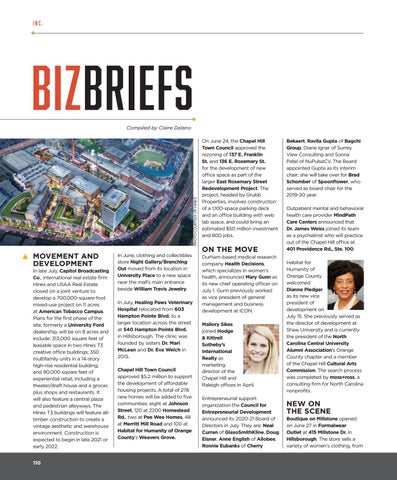 In late July, Capitol Broadcasting Co., international real estate firm Hines and USAA Real Estate closed on a joint venture to develop a 700,000-square-foot mixed-use project on 11 acres at American Tobacco Campus. Plans for the first phase of the site, formerly a University Ford dealership, will be on 8 acres and include: 313,000 square feet of leasable space in two Hines T3 creative office buildings; 350 multifamily units in a 14-story high-rise residential building; and 90,000 square feet of experiential retail, including a theater/draft house and a grocer, plus shops and restaurants. It will also feature a central plaza and pedestrian alleyways. The Hines T3 buildings will feature alltimber construction to create a vintage aesthetic and warehouse environment. Construction is expected to begin in late 2021 or early 2022. 110

In June, clothing and collectibles store Night Gallery/Branching Out moved from its location in University Place to a new space near the mall’s main entrance beside William Travis Jewelry. In July, Healing Paws Veterinary Hospital relocated from 603 Hampton Pointe Blvd. to a larger location across the street at 540 Hampton Pointe Blvd. in Hillsborough. The clinic was founded by sisters Dr. Mari McLean and Dr. Eva Welch in 2015. Chapel Hill Town Council approved $5.2 million to support the development of affordable housing projects. A total of 278 new homes will be added to five communities: eight at Johnson Street, 120 at 2200 Homestead Rd., two at Pee Wee Homes, 48 at Merritt Mill Road and 100 at Habitat for Humanity of Orange County’s Weavers Grove.

On June 24, the Chapel Hill Town Council approved the rezoning of 137 E. Franklin St. and 136 E. Rosemary St. for the development of new office space as part of the larger East Rosemary Street Redevelopment Project. The project, headed by Grubb Properties, involves construction of a 1,100-space parking deck and an office building with web lab space, and could bring an estimated $50 million investment and 800 jobs.

Bekaert, Ravila Gupta of Bagchi Group, Diane Ignar of Surrey View Consulting and Sonna Patel of NuPulseCV. The Board appointed Gupta as its interim chair; she will take over for Brad Schomber of Spoonflower, who served as board chair for the 2019-20 year. Outpatient mental and behavioral health care provider MindPath Care Centers announced that Dr. James Weiss joined its team as a psychiatrist who will practice out of the Chapel Hill office at 401 Providence Rd., Ste. 100. Habitat for Humanity of Orange County welcomed Dianne Pledger as its new vice president of development on July 15. She previously served as the director of development at Shaw University and is currently the president of the North Carolina Central University Alumni Association’s Orange County chapter and a member of the Chapel Hill Cultural Arts Commission. The search process was completed by moss+ross, a consulting firm for North Carolina nonprofits.

Boutique on Millstone opened on June 27 in Formalwear Outlet at 415 Millstone Dr. in Hillsborough. The store sells a variety of women’s clothing, from