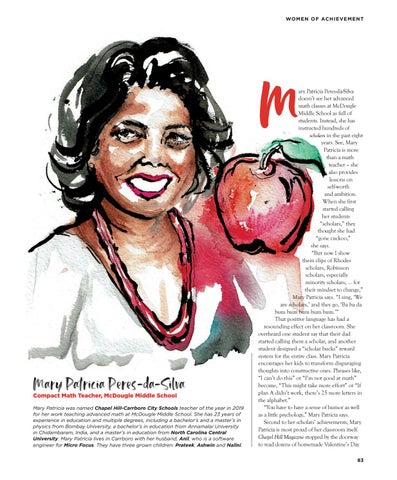 Mary Patricia was named Chapel Hill-Carrboro City Schools teacher of the year in 2019 for her work teaching advanced math at McDougle Middle School. She has 23 years of experience in education and multiple degrees, including a bachelor’s and a master’s in physics from Bombay University, a bachelor’s in education from Annamalai University in Chidambaram, India, and a master’s in education from North Carolina Central University. Mary Patricia lives in Carrboro with her husband, Anil, who is a software engineer for Micro Focus. They have three grown children: Prateek, Ashwin and Nalini.

ary Patricia Peres-da-Silva doesn’t see her advanced math classes at McDougle Middle School as full of students. Instead, she has instructed hundreds of scholars in the past eight years. See, Mary Patricia is more than a math teacher – she also provides lessons on self-worth and ambition. When she first started calling her students “scholars,” they thought she had “gone cuckoo,” she says. “But now I show them clips of Rhodes scholars, Robinson scholars, especially minority scholars, … for their mindset to change,” Mary Patricia says. “I sing, ‘We are scholars,’ and they go, ‘Ba ba da bum bum bum bum bum.’” That positive language has had a resounding effect on her classroom. She overheard one student say that their dad started calling them a scholar, and another student designed a “scholar bucks” reward system for the entire class. Mary Patricia encourages her kids to transform disparaging thoughts into constructive ones. Phrases like, “I can’t do this” or “I’m not good at math” become, “This might take more effort” or “If plan A didn’t work, there’s 25 more letters in the alphabet.” “You have to have a sense of humor as well as a little psychology,” Mary Patricia says. Second to her scholars’ achievements, Mary Patricia is most proud of her classroom itself. Chapel Hill Magazine stopped by the doorway to read dozens of homemade Valentine’s Day 83