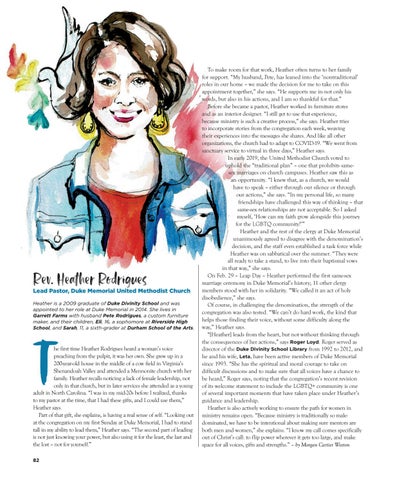 Lead Pastor, Duke Memorial United Methodist Church Heather is a 2009 graduate of Duke Divinity School and was appointed to her role at Duke Memorial in 2014. She lives in Garrett Farms with husband Pete Rodrigues, a custom furniture maker, and their children, Eli, 16, a sophomore at Riverside High School, and Sarah, 11, a sixth-grader at Durham School of the Arts.

he first time Heather Rodrigues heard a woman’s voice preaching from the pulpit, it was her own. She grew up in a 200-year-old house in the middle of a cow field in Virginia’s Shenandoah Valley and attended a Mennonite church with her family. Heather recalls noticing a lack of female leadership, not only in that church, but in later services she attended as a young adult in North Carolina. “I was in my mid-20s before I realized, thanks to my pastor at the time, that I had these gifts, and I could use them,” Heather says. Part of that gift, she explains, is having a real sense of self. “Looking out at the congregation on my first Sunday at Duke Memorial, I had to stand tall in my ability to lead them,” Heather says. “The second part of leading is not just knowing your power, but also using it for the least, the last and the lost – not for yourself.” 82

To make room for that work, Heather often turns to her family for support. “My husband, Pete, has leaned into the ‘nontraditional’ roles in our home – we made the decision for me to take on this appointment together,” she says. “He supports me in not only his words, but also in his actions, and I am so thankful for that.” Before she became a pastor, Heather worked in furniture stores and as an interior designer. “I still get to use that experience, because ministry is such a creative process,” she says. Heather tries to incorporate stories from the congregation each week, weaving their experiences into the messages she shares. And like all other organizations, the church had to adapt to COVID-19. “We went from sanctuary service to virtual in three days,” Heather says. In early 2019, the United Methodist Church voted to uphold the “traditional plan” – one that prohibits samesex marriages on church campuses. Heather saw this as an opportunity. “I knew that, as a church, we would have to speak – either through our silence or through our actions,” she says. “In my personal life, so many friendships have challenged this way of thinking – that same-sex relationships are not acceptable. So I asked myself, ‘How can my faith grow alongside this journey for the LGBTQ community?’” Heather and the rest of the clergy at Duke Memorial unanimously agreed to disagree with the denomination’s decision, and the staff even established a task force while Heather was on sabbatical over the summer. “They were all ready to take a stand, to live into their baptismal vows in that way,” she says. On Feb. 29 – Leap Day – Heather performed the first same-sex marriage ceremony in Duke Memorial’s history; 11 other clergy members stood with her in solidarity. “We called it an act of holy disobedience,” she says. Of course, in challenging the denomination, the strength of the congregation was also tested. “We can’t do hard work, the kind that helps those finding their voice, without some difficulty along the way,” Heather says. “[Heather] leads from the heart, but not without thinking through the consequences of her actions,” says Roger Loyd. Roger served as director of the Duke Divinity School Library from 1992 to 2012, and he and his wife, Leta, have been active members of Duke Memorial since 1993. “She has the spiritual and moral courage to take on difficult discussions and to make sure that all voices have a chance to be heard,” Roger says, noting that the congregation’s recent revision of its welcome statement to include the LGBTQ+ community is one of several important moments that have taken place under Heather’s guidance and leadership. Heather is also actively working to ensure the path for women in ministry remains open. “Because ministry is traditionally so maledominated, we have to be intentional about making sure mentors are both men and women,” she explains. “I know my call comes specifically out of Christ’s call: to flip power wherever it gets too large, and make space for all voices, gifts and strengths.” – by Morgan Cartier Weston