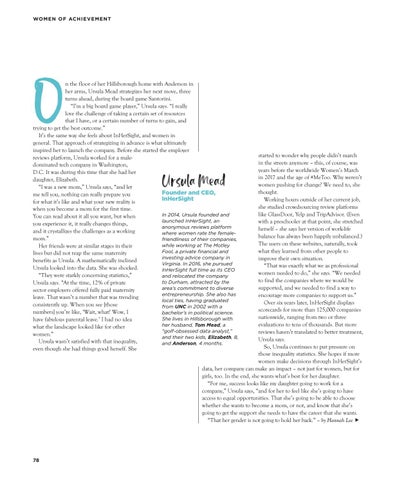 n the floor of her Hillsborough home with Anderson in her arms, Ursula Mead strategizes her next move, three turns ahead, during the board game Santorini. “I’m a big board game player,” Ursula says. “I really love the challenge of taking a certain set of resources that I have, or a certain number of turns to gain, and trying to get the best outcome.” It’s the same way she feels about InHerSight, and women in general. That approach of strategizing in advance is what ultimately inspired her to launch the company. Before she started the employer reviews platform, Ursula worked for a maledominated tech company in Washington, D.C. It was during this time that she had her daughter, Elizabeth. “I was a new mom,” Ursula says, “and let Founder and CEO, me tell you, nothing can really prepare you InHerSight for what it’s like and what your new reality is

started to wonder why people didn’t march in the streets anymore – this, of course, was years before the worldwide Women’s March in 2017 and the age of #MeToo. Why weren’t women pushing for change? We need to, she thought. Working hours outside of her current job, she studied crowdsourcing review platforms like GlassDoor, Yelp and TripAdvisor. (Even In 2014, Ursula founded and launched InHerSight, an with a preschooler at that point, she stretched anonymous reviews platform herself – she says her version of work-life where women rate the femalebalance has always been happily unbalanced.) friendliness of their companies, The users on these websites, naturally, took while working at The Motley what they learned from other people to Fool, a private financial and investing advice company in improve their own situation. Virginia. In 2016, she pursued “That was exactly what we as professional InHerSight full time as its CEO women needed to do,” she says. “We needed and relocated the company to find the companies where we would be to Durham, attracted by the supported, and we needed to find a way to area’s commitment to diverse entrepreneurship. She also has encourage more companies to support us.” local ties, having graduated Over six years later, InHerSight displays from UNC in 2002 with a scorecards for more than 125,000 companies bachelor’s in political science. nationwide, ranging from two or three She lives in Hillsborough with evaluations to tens of thousands. But more her husband, Tom Mead, a “golf-obsessed data analyst,” reviews haven’t translated to better treatment, and their two kids, Elizabeth, 8, Ursula says. and Anderson, 4 months. So, Ursula continues to put pressure on those inequality statistics. She hopes if more women make decisions through InHerSight’s data, her company can make an impact – not just for women, but for girls, too. In the end, she wants what’s best for her daughter. “For me, success looks like my daughter going to work for a company,” Ursula says, “and for her to feel like she’s going to have access to equal opportunities. That she’s going to be able to choose whether she wants to become a mom, or not, and know that she’s going to get the support she needs to have the career that she wants. “That her gender is not going to hold her back.” – by Hannah Lee 

when you become a mom for the first time. You can read about it all you want, but when you experience it, it really changes things, and it crystallizes the challenges as a working mom.” Her friends were at similar stages in their lives but did not reap the same maternity benefits as Ursula. A mathematically inclined Ursula looked into the data. She was shocked. “They were starkly concerning statistics,” Ursula says. “At the time, 12% of private sector employers offered fully paid maternity leave. That wasn’t a number that was trending consistently up. When you see [those numbers] you’re like, ‘Wait, what? Wow, I have fabulous parental leave.’ I had no idea what the landscape looked like for other women.” Ursula wasn’t satisfied with that inequality, even though she had things good herself. She