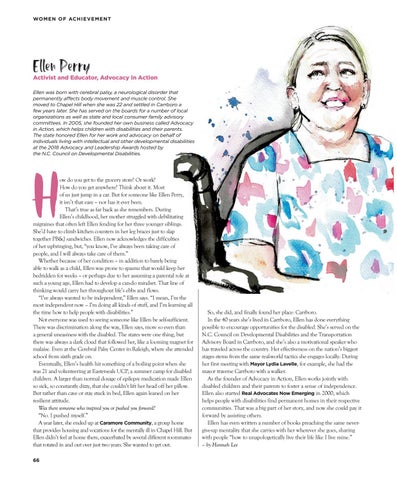 Activist and Educator, Advocacy in Action Ellen was born with cerebral palsy, a neurological disorder that permanently affects body movement and muscle control. She moved to Chapel Hill when she was 22 and settled in Carrboro a few years later. She has served on the boards for a number of local organizations as well as state and local consumer family advisory committees. In 2005, she founded her own business called Advocacy in Action, which helps children with disabilities and their parents. The state honored Ellen for her work and advocacy on behalf of individuals living with intellectual and other developmental disabilities at the 2018 Advocacy and Leadership Awards hosted by the N.C. Council on Developmental Disabilities.

ow do you get to the grocery store? Or work? How do you get anywhere? Think about it. Most of us just jump in a car. But for someone like Ellen Perry, it isn’t that easy – nor has it ever been. That’s true as far back as she remembers. During Ellen’s childhood, her mother struggled with debilitating migraines that often left Ellen fending for her three younger siblings. She’d have to climb kitchen counters in her leg braces just to slap together PB&J sandwiches. Ellen now acknowledges the difficulties of her upbringing, but, “you know, I’ve always been taking care of people, and I will always take care of them.” Whether because of her condition – in addition to barely being able to walk as a child, Ellen was prone to spasms that would keep her bedridden for weeks – or perhaps due to her assuming a parental role at such a young age, Ellen had to develop a can-do mindset. That line of thinking would carry her throughout life’s ebbs and flows. “I’ve always wanted to be independent,” Ellen says. “I mean, I’m the most independent now – I’m doing all kinds of stuff, and I’m learning all the time how to help people with disabilities.” Not everyone was used to seeing someone like Ellen be self-sufficient. There was discrimination along the way, Ellen says, more so even than a general uneasiness with the disabled. The stares were one thing, but there was always a dark cloud that followed her, like a looming magnet for malaise. Even at the Cerebral Palsy Center in Raleigh, where she attended school from sixth grade on. Eventually, Ellen’s health hit something of a boiling point when she was 21 and volunteering at Easterseals UCP, a summer camp for disabled children. A larger than normal dosage of epilepsy medication made Ellen so sick, so constantly dizzy, that she couldn’t lift her head off her pillow. But rather than cave or stay stuck in bed, Ellen again leaned on her resilient attitude. Was there someone who inspired you or pushed you forward? “No. I pushed myself.” A year later, she ended up at Caramore Community, a group home that provides housing and vocations for the mentally ill in Chapel Hill. But Ellen didn’t feel at home there, exacerbated by several different roommates that rotated in and out over just two years. She wanted to get out. 66

So, she did, and finally found her place: Carrboro. In the 40 years she’s lived in Carrboro, Ellen has done everything possible to encourage opportunities for the disabled. She’s served on the N.C. Council on Developmental Disabilities and the Transportation Advisory Board in Carrboro, and she’s also a motivational speaker who has traveled across the country. Her effectiveness on the nation’s biggest stages stems from the same real-world tactics she engages locally: During her first meeting with Mayor Lydia Lavelle, for example, she had the mayor traverse Carrboro with a walker. As the founder of Advocacy in Action, Ellen works jointly with disabled children and their parents to foster a sense of independence. Ellen also started Real Advocates Now Emerging in 2000, which helps people with disabilities find permanent homes in their respective communities. That was a big part of her story, and now she could pay it forward by assisting others. Ellen has even written a number of books preaching the same nevergive-up mentality that she carries with her wherever she goes, sharing with people “how to unapologetically live their life like I live mine.” – by Hannah Lee