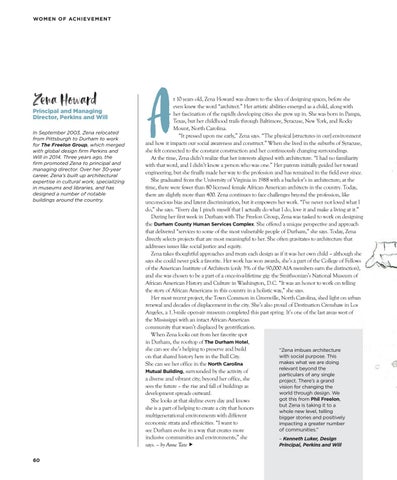 Principal and Managing Director, Perkins and Will In September 2003, Zena relocated from Pittsburgh to Durham to work for The Freelon Group, which merged with global design firm Perkins and Will in 2014. Three years ago, the firm promoted Zena to principal and managing director. Over her 30-year career, Zena’s built up architectural expertise in cultural work, specializing in museums and libraries, and has designed a number of notable buildings around the country.

t 10 years old, Zena Howard was drawn to the idea of designing spaces, before she even knew the word “architect.” Her artistic abilities emerged as a child, along with her fascination of the rapidly developing cities she grew up in. She was born in Pampa, Texas, but her childhood trails through Baltimore, Syracuse, New York, and Rocky Mount, North Carolina. “It pressed upon me early,” Zena says. “The physical [structures in our] environment and how it impacts our social awareness and construct.” When she lived in the suburbs of Syracuse, she felt connected to the constant construction and her continuously changing surroundings. At the time, Zena didn’t realize that her interests aligned with architecture. “I had no familiarity with that word, and I didn’t know a person who was one.” Her parents initially guided her toward engineering, but she finally made her way to the profession and has remained in the field ever since. She graduated from the University of Virginia in 1988 with a bachelor’s in architecture; at the time, there were fewer than 80 licensed female African American architects in the country. Today, there are slightly more than 400. Zena continues to face challenges beyond the profession, like unconscious bias and latent discrimination, but it empowers her work. “I’ve never not loved what I do,” she says. “Every day I pinch myself that I actually do what I do, love it and make a living at it.” During her first week in Durham with The Freelon Group, Zena was tasked to work on designing the Durham County Human Services Complex. She offered a unique perspective and approach that delivered “services to some of the most vulnerable people of Durham,” she says. Today, Zena directly selects projects that are most meaningful to her. She often gravitates to architecture that addresses issues like social justice and equity. Zena takes thoughtful approaches and treats each design as if it was her own child – although she says she could never pick a favorite. Her work has won awards, she’s a part of the College of Fellows of the American Institute of Architects (only 3% of the 90,000 AIA members earn the distinction), and she was chosen to be a part of a once-in-a-lifetime gig: the Smithsonian’s National Museum of African American History and Culture in Washington, D.C. “It was an honor to work on telling the story of African Americans in this country in a holistic way,” she says. Her most recent project, the Town Common in Greenville, North Carolina, shed light on urban renewal and decades of displacement in the city. She’s also proud of Destination Crenshaw in Los Angeles, a 1.3-mile open-air museum completed this past spring. It’s one of the last areas west of the Mississippi with an intact African American community that wasn’t displaced by gentrification. When Zena looks out from her favorite spot in Durham, the rooftop of The Durham Hotel, she can see she’s helping to preserve and build “Zena imbues architecture with social purpose. This on that shared history here in the Bull City. makes what we are doing She can see her office in the North Carolina relevant beyond the Mutual Building, surrounded by the activity of particulars of any single a diverse and vibrant city; beyond her office, she project. There’s a grand sees the future – the rise and fall of buildings as vision for changing the world through design. We development spreads outward. got this from Phil Freelon, She looks at that skyline every day and knows but Zena is taking it to a she is a part of helping to create a city that honors whole new level, telling multigenerational environments with different bigger stories and positively economic strata and ethnicities. “I want to impacting a greater number of communities.” see Durham evolve in a way that creates more inclusive communities and environments,” she – Kenneth Luker, Design Principal, Perkins and Will says. – by Anne Tate 