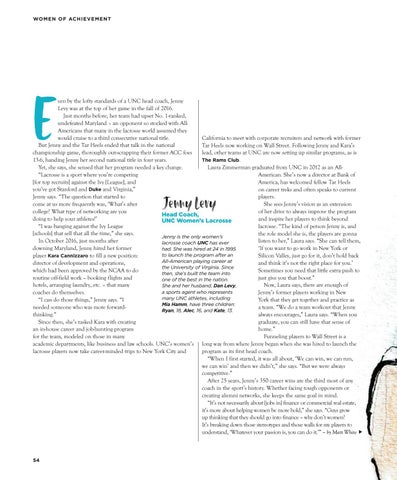 ven by the lofty standards of a UNC head coach, Jenny Levy was at the top of her game in the fall of 2016. Just months before, her team had upset No. 1-ranked, undefeated Maryland – an opponent so stocked with AllAmericans that many in the lacrosse world assumed they would cruise to a third consecutive national title. California to meet with corporate recruiters and network with former But Jenny and the Tar Heels ended that talk in the national Tar Heels now working on Wall Street. Following Jenny and Kara’s championship game, thoroughly out-scrapping their former ACC foes lead, other teams at UNC are now setting up similar programs, as is 13-6, handing Jenny her second national title in four years. The Rams Club. Yet, she says, she sensed that her program needed a key change. Laura Zimmerman graduated from UNC in 2012 as an All“Lacrosse is a sport where you’re competing American. She’s now a director at Bank of [for top recruits] against the Ivy [League], and America, has welcomed fellow Tar Heels you’ve got Stanford and Duke and Virginia,” on career treks and often speaks to current Jenny says. “The question that started to players. come at us more frequently was, ‘What’s after She sees Jenny’s vision as an extension college? What type of networking are you of her drive to always improve the program Head Coach, doing to help your athletes?’ and inspire her players to think beyond UNC Women’s Lacrosse “I was banging against the Ivy League lacrosse. “The kind of person Jenny is, and [schools] that sell that all the time,” she says. the role model she is, the players are gonna Jenny is the only women’s In October 2016, just months after listen to her,” Laura says. “She can tell them, lacrosse coach UNC has ever downing Maryland, Jenny hired her former ‘If you want to go work in New York or had. She was hired at 24 in 1995 to launch the program after an player Kara Cannizzaro to fill a new position: Silicon Valley, just go for it, don’t hold back All-American playing career at director of development and operations, and think it’s not the right place for you.’ the University of Virginia. Since which had been approved by the NCAA to do Sometimes you need that little extra push to then, she’s built the team into routine off-field work – booking flights and just give you that boost.” one of the best in the nation. hotels, arranging laundry, etc. – that many Now, Laura says, there are enough of She and her husband, Dan Levy, a sports agent who represents coaches do themselves. Jenny’s former players working in New many UNC athletes, including “I can do those things,” Jenny says. “I York that they get together and practice as Mia Hamm, have three children: needed someone who was more forwarda team. “We do a team workout that Jenny Ryan, 18, Alec, 16, and Kate, 13. thinking.” always encourages,” Laura says. “When you Since then, she’s tasked Kara with creating graduate, you can still have that sense of an in-house career and job-hunting program home.” for the team, modeled on those in many Funneling players to Wall Street is a academic departments, like business and law schools. UNC’s women’s long way from where Jenny began when she was hired to launch the lacrosse players now take career-minded trips to New York City and program as its first head coach. “When I first started, it was all about, ‘We can win, we can run, we can win’ and then we didn’t,” she says. “But we were always competitive.” After 25 years, Jenny’s 350 career wins are the third most of any coach in the sport’s history. Whether facing tough opponents or creating alumni networks, she keeps the same goal in mind. “It’s not necessarily about [jobs in] finance or commercial real estate, it’s more about helping women be more bold,” she says. “Guys grow up thinking that they should go into finance – why don’t women? It’s breaking down those stereotypes and those walls for my players to understand, ‘Whatever your passion is, you can do it.’” – by Matt White 