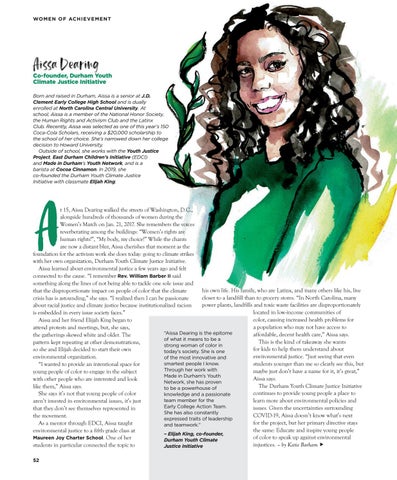 Co-founder, Durham Youth Climate Justice Initiative Born and raised in Durham, Aissa is a senior at J.D. Clement Early College High School and is dually enrolled at North Carolina Central University. At school, Aissa is a member of the National Honor Society, the Human Rights and Activism Club and the Latinx Club. Recently, Aissa was selected as one of this year’s 150 Coca-Cola Scholars, receiving a $20,000 scholarship to the school of her choice. She’s narrowed down her college decision to Howard University. Outside of school, she works with the Youth Justice Project, East Durham Children’s Initiative (EDCI) and Made in Durham’s Youth Network, and is a barista at Cocoa Cinnamon. In 2019, she co-founded the Durham Youth Climate Justice Initiative with classmate Elijah King.

t 15, Aissa Dearing walked the streets of Washington, D.C., alongside hundreds of thousands of women during the Women’s March on Jan. 21, 2017. She remembers the voices reverberating among the buildings: “Women’s rights are human rights!”, “My body, my choice!” While the chants are now a distant blur, Aissa cherishes that moment as the foundation for the activism work she does today: going to climate strikes with her own organization, Durham Youth Climate Justice Initiative. Aissa learned about environmental justice a few years ago and felt connected to the cause. “I remember Rev. William Barber II said something along the lines of not being able to tackle one sole issue and his own life. His family, who are Latinx, and many others like his, live that the disproportionate impact on people of color that the climate closer to a landfill than to grocery stores. “In North Carolina, many crisis has is astounding,” she says. “I realized then I can be passionate power plants, landfills and toxic waste facilities are disproportionately about racial justice and climate justice because institutionalized racism located in low-income communities of is embedded in every issue society faces.” color, causing increased health problems for Aissa and her friend Elijah King began to a population who may not have access to attend protests and meetings, but, she says, “Aissa Dearing is the epitome affordable, decent health care,” Aissa says. the gatherings skewed white and older. The of what it means to be a This is the kind of takeaway she wants pattern kept repeating at other demonstrations, strong woman of color in for kids to help them understand about so she and Elijah decided to start their own today’s society. She is one environmental justice. “Just seeing that even environmental organization. of the most innovative and smartest people I know. students younger than me so clearly see this, but “I wanted to provide an intentional space for Through her work with maybe just don’t have a name for it, it’s great,” young people of color to engage in the subject Made in Durham’s Youth Aissa says. with other people who are interested and look Network, she has proven The Durham Youth Climate Justice Initiative like them,” Aissa says. to be a powerhouse of continues to provide young people a place to She says it’s not that young people of color knowledge and a passionate team member for the learn more about environmental policies and aren’t invested in environmental issues, it’s just Early College Action Team. issues. Given the uncertainties surrounding that they don’t see themselves represented in She has also constantly COVID-19, Aissa doesn’t know what’s next the movement. expressed traits of leadership for the project, but her primary directive stays As a mentor through EDCI, Aissa taught and teamwork.” the same: Educate and inspire young people environmental justice to a fifth grade class at – Elijah King, co-founder, of color to speak up against environmental Maureen Joy Charter School. One of her Durham Youth Climate injustices. – by Katie Barham  students in particular connected the topic to Justice Initiative 52