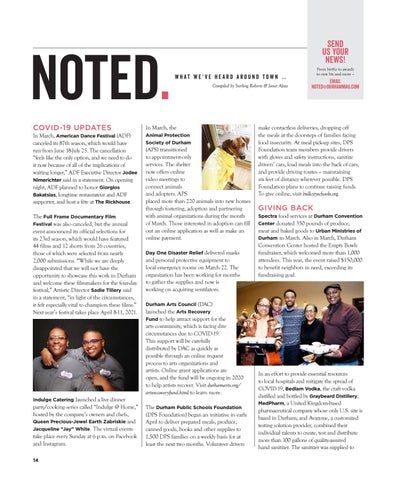 noted. COVID-19 UPDATES In March, American Dance Festival (ADF) canceled its 87th season, which would have run from June 18-July 25. The cancellation “feels like the only option, and we need to do it now because of all of the implications of waiting longer,” ADF Executive Director Jodee Nimerichter said in a statement. On opening night, ADF planned to honor Giorgios Bakatsias, longtime restaurateur and ADF supporter, and host a fête at The Rickhouse. The Full Frame Documentary Film Festival was also canceled, but the annual event announced its official selections for its 23rd season, which would have featured 44 films and 12 shorts from 26 countries, those of which were selected from nearly 2,000 submissions. “While we are deeply disappointed that we will not have the opportunity to showcase this work in Durham and welcome these filmmakers for the four-day festival,” Artistic Director Sadie Tillery said in a statement, “in light of the circumstances, it felt especially vital to champion these films.” Next year’s festival takes place April 8-11, 2021.

Send us your news! WHAT WE’VE HE ARD AROUND TOWN … Compiled by Sterling Roberts & Janet Alsas

In March, the Animal Protection Society of Durham

(APS) transitioned to appointment-only services. The shelter now offers online video meetings to connect animals and adopters. APS placed more than 220 animals into new homes through fostering, adoption and partnering with animal organizations during the month of March. Those interested in adoption can fill out an online application as well as make an online payment. Day One Disaster Relief delivered masks

and personal protective equipment to local emergency rooms on March 22. The organization has been working for months to gather the supplies and now is working on acquiring ventilators.

Convention Center hosted the Empty Bowls fundraiser, which welcomed more than 1,000 attendees. This year, the event raised $150,000 to benefit neighbors in need, exceeding its fundraising goal.

arts community, which is facing dire circumstances due to COVID-19. This support will be carefully distributed by DAC as quickly as possible through an online request process to arts organizations and artists. Online grant applications are open, and the fund will be ongoing in 2020 to help artists recover. Visit durhamarts.org/ artsrecoveryfund.html to learn more. party/cooking series called “Indulge @ Home,” hosted by the company’s owners and chefs, Queen Precious-Jewel Earth Zabriskie and Jacqueline “Jay” White. The virtual events take place every Sunday at 6 p.m. on Facebook and Instagram.

The Durham Public Schools Foundation (DPS Foundation) began an initiative in early April to deliver prepared meals, produce, canned goods, books and other supplies to 1,500 DPS families on a weekly basis for at least the next two months. Volunteer drivers

In an effort to provide essential resources to local hospitals and mitigate the spread of COVID-19, Bedlam Vodka, the craft vodka distilled and bottled by Graybeard Distillery; MedPharm, a United Kingdom-based pharmaceutical company whose only U.S. site is based in Durham; and Avazyme, a customized testing solution provider, combined their individual talents to create, test and distribute more than 100 gallons of quality-assured hand sanitizer. The sanitizer was supplied to