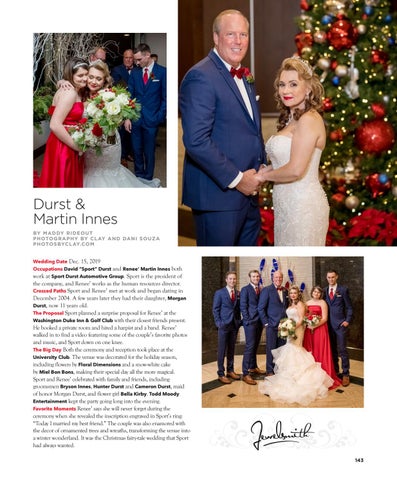 the company, and Renee’ works as the human resources director. Crossed Paths Sport and Renee’ met at work and began dating in December 2004. A few years later they had their daughter, Morgan Durst, now 11 years old. The Proposal Sport planned a surprise proposal for Renee’ at the Washington Duke Inn & Golf Club with their closest friends present. He booked a private room and hired a harpist and a band. Renee’ walked in to find a video featuring some of the couple’s favorite photos and music, and Sport down on one knee. The Big Day Both the ceremony and reception took place at the University Club. The venue was decorated for the holiday season, including flowers by Floral Dimensions and a snow-white cake by Miel Bon Bons, making their special day all the more magical. Sport and Renee’ celebrated with family and friends, including groomsmen Bryson Innes, Hunter Durst and Cameron Durst, maid of honor Morgan Durst, and flower girl Bella Kirby. Todd Moody Entertainment kept the party going long into the evening. Favorite Moments Renee’ says she will never forget during the ceremony when she revealed the inscription engraved in Sport’s ring: “Today I married my best friend.” The couple was also enamored with the decor of ornamented trees and wreaths, transforming the venue into a winter wonderland. It was the Christmas fairy-tale wedding that Sport had always wanted. 143